House may or may not get into a game, as he's going to serve in the bullpen as a longman.

There's been no word from the Indians as to how he's going to be used, but unless tonight's starter (Ubaldo Jimenez) is injured, House is up here in case the Indians need long relief. The bullpen was used extensively over the weekend, and if Ubaldo can't go six innings, then that would put even more of a strain on it. Hence House is up here, serving much the same role that Corey Kluber served earlier in the season. If House does get into a game, he'd be making his major-league debut.

The Indians selected House in the 16th round of the 2008 draft (the same year the Indians drafted Lonnie Chisenhall) out of high school, and gave him a sizable bonus ($775,000) to turn pro rather than go to college. That bonus was a pretty good investment, as House has made it to Columbus as a starter, maintaining his strikeout rates along the way. House doesn't have an overpowering fastball (low 90s), but does have a very effective changeup. He dominated AA, and earned a promotion to Columbus at the end of April. He's had mixed results with the Clippers.

With all that being said, House is not up here to start a game, but to soak up some innings if the game gets out of hand. He would probably go back down if Chris Perez is activated in the next couple of days, or if not, he'd go down when the Indians bring up both Carlos Carrasco and Trevor Bauer for this Friday's doubleheader in Chicago. Because Carrasco would be the 26th man that day, the usual 10-day waiting period would not apply. 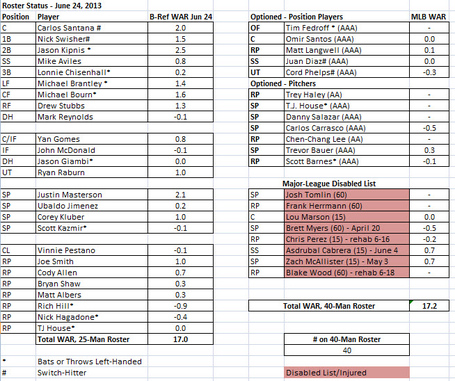