Lonnie Chisenhall has been recalled from Columbus.

This has nothing to do with how Langwell was pitching and everything to do with both how Chisenhall was doing in Columbus and the state of the 25-man roster. The Indians have been going with a three-man bench for quite a while now, and they've been getting away with it because the three players on the bench (Mike Aviles, Ryan Raburn, and Yan Gomes) have been extremely productive.

But injuries and demotions have made that three-man bench untenable. The Indians optioned Lonnie Chisnehall to Columbus, making Mark Reynolds an everyday third baseman instead of a 1B/DH. Then Asdrubal Cabrera got hurt, which made Mike Aviles and everyday player, so that had to bring in John McDonald to serve as an emergency backup. Then Nick Swisher re-aggravated his shoulder, but not enough to put him on the DL. That meant last night the Indians started John McDonald at third base with only two healthy players on the bench: Yan Gomes and Drew Stubbs (Ryan Raburn was playing right). So when the bottom of the ninth started last night, who was leading off the inning? John McDonald, one of the worst offensive players in MLB history.

Meanwhile Chisenhall was obliterating AAA pitching, hitting a ridiculous .453/.516/.773 over the last month. He obviously has nothing more to prove in AAA, at least from the offensive side, and needs to be facing major-league pitchers to complete his development. His defense, while it also isn't polished, is going to be better than what Reynolds was doing there. I also think Reynolds moving back to a less demanding position will help him get back on track offensively, though I have no evidence to back that up.

Don't expect Chisenhall to bat like Miguel Cabrera in Cleveland just because he did it in Columbus. He still needs to learn how to hit good major-league left-handers and lay off quality maor-league sliders/curves, things that he couldn't have learned in AAA. 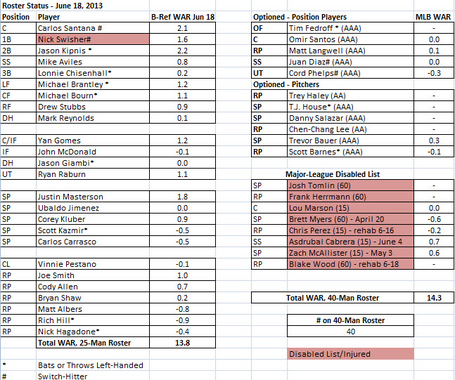