After nearly four weeks on the Disabled List, Michael Bourn has been activated and should be in the lineup tomorrow night in Detroit.

After today's game, Terry Francona announced that Michael Bourn, who had been out since April 16th with a laceration on one of his fingers, has been activated from the 15-Day Disabled List.

This move finally fixes the roster imbalance between the pitching staff and the position players that had been there on and off since the beginning of the season.Starting tomorrow, there will be 12 pitchers and 13 position players on the roster.

Scott Barnes, who was the eighth pitcher in the bullpen, will go back to Columbus with a couple nice major-league outings under his belt. He's the third left-handed reliever on the depth chart, but this won't be the last you'll hear of him this season. Nick Hagadone, who has been nothing short of spectacular in his brief stint with the Indians, will likely be the player optioned down when Vinnie Pestano is eligible to come off the DL on the 16th. So there is some depth building up on the reliever side, and you begin to understand why the Indians non-tendered Rafael Perez and traded Tony Sipp last winter.

Ryan Raburn, who has essentially been an everyday player since Bourn first went on the DL, will return to a utility role, though I think he'll play more than you'd expect because the Indians probably want to minimize Nick Swisher's appearances in the outfield. Drew Stubbs, who has filled in admirably in center field, will shift back to right, in turn improving the outfield defense even further.

What we've found out during Bourn's absence is that the Indians have an outstanding bench. Even though at times there's only been three players available, the utility and effectiveness of those players allowed the Indians to get away with having just three bench players for several weeks at a time. Ryan Raburn, Mike Aviles, and Yan Gomes have allowed Terry Francona tremendous flexibility that previous Indians managers simply didn't have. And Jason Giambi, though he's limited to DH duties only, gives the Indians both a nice pinch-hitter off the bench as well as another bat in the lineup a couple times a week. Asdrubal Cabrera could sit for an extra day because Mike Aviles, who can play a good shortstop, was on the bench. You could sit Lonnie Chisenhall for a couple days so he could work on his swing because Aviles could also play third base. You could sit Nick Swisher for almost a week because Ryan Raburn was hitting out of his mind. And you could give Carlos Santana a complete day off because Yan Gomes has been contributing both on offense and defense.

Michael Bourn was missed, don't get me wrong, but the Indians have survived his absence in a way previous Indians clubs could never have done. 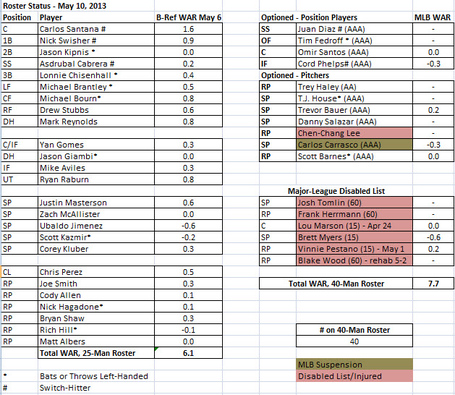