This move is about Pestano's elbow, but I think it means that the injury isn't that serious.

I think this is good news. If Pestano's elbow warranted a DL stint, they would have cleared a spot on the roster by placing Pestano on the DL and would have recalled Nick Hagadone instead of Barnes. Instead, the Indians have DFAd Ezequiel Carrera to make room for Barnes, who although he was optioned down between doubleheader games last weekend, can be recalled because of the DH roster rules. Barnes is up here to give the Indians an extra arm while Pestano is out.

That Carrera was DFAd could mean good news on the outfield front as well, especially when you consider that in the same press release it was announced that Michael Bourn is going to start his rehab assignment on Monday (in Columbus). So if all goes well, he'll be off the DL by the end of the week, Pestano will be throwing again, and Barnes will be back in Columbus.

The Indians have a decent chance of getting Carrera through waivers. If he does clear them, Carrera will not able to refuse an outright assignment. With the Indians' thin outfield depth, he can be useful later on this season. 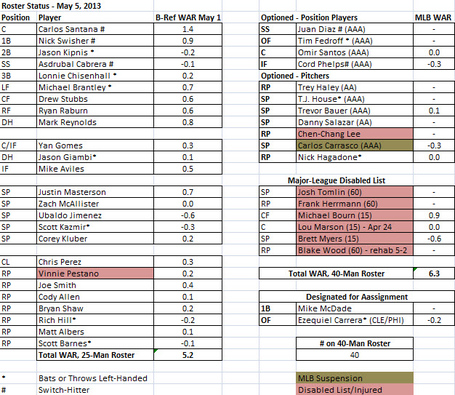