Scott Kazmir had his best start of the early season, and gained his first win in three seasons in the process.

The Indians have now been on an offensive roll for a week, and it's not just one or two players that's doing it: 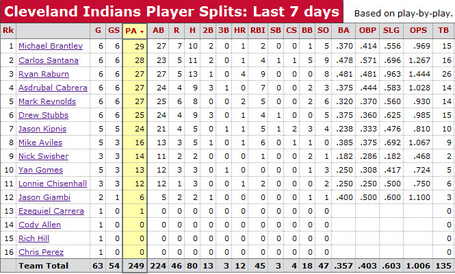 This is from April 27-May 3 - Game 1 of Royals series through Game 1 of Twins series, so it includes a couple offensive clunkers at the beginning. In a couple hours, once yesterday's games are uploaded, this will look even better. You have the obvious standouts like Ryan Raburn and Carlos Santana, but what's remarkable are the almost uniform excellence of the non-standouts. Nick Swisher is the only regular who has an OPS below .810, and he missed a big chunk of the offensive explosion with a sore shoulder.

The other thing to note is that for the most part the Indians have been doing this against quality pitchers. Again, the above numbers include at-bats against Ervin Santana, Jeremy Guthrie, Wade Davis, Roy Halladay, and Cliff Lee. And these numbers include two left-handed starters, which this club has in the past few years struggled against.

Yesterday the Indians faced off against Kevin Correia, who had been the Twins' best starter. Correia until this season had been a career National Leaguer, pitching with the Giants, Padres, and Pirates. He's been a typical 4th/5th starter his career, always just good enough to stick around in a rotation, but not nearly good enough to ever get that big contract. This winter he signed with the Twins for 2 years/$10M, which is pretty much minimum wage for a free agent starting pitcher. Still, he's Minnesota highest-paid pitcher, and up until yesterday's game he was pitching like it, averaging almost 8 innings per start and posting a 2.23 ERA (even though he isn't striking anyone out).

But the Indians have been making a recent habit of ruining a pitcher's statistics. They scored four runs off Correia in five innings, and was one hit from possibly ending his day several innings earlier. Mark Reynolds in particular had an impressive at-bat against Correia in the fifth inning, fouling off several difficult pitches before serving the 10th pitch of the at-bat into center field. There were two outs at the time and nobody on base, which made the at-bat even more impressive; he could have just swung for the fences, but instead got the single and in the process probably knocked Correia out of the game an inning early.

The Twins are in the midst of reshuffling their roster with internal prospects, at least from the offensive side. They traded both Ben Revere and Denard Span last winter to give Aaron Hicks (BA's #6 prospect) and Oswaldo Arcia (#3) starting jobs, and last year Brian Dozier and Chris Parmelee began to get playing time. It's very possible that by the end of the season the Twins have a functional AL lineup, especially with the Mauer/Morneau/Willingham core already in place.

Scott Kazmir faced a Twins lineup that isn't yet that dangerous, but still, it was nice to see him capable of at times dominating major-league hitters. He struggled at the outside with command, but really start to get into a rhythm towards the end of his outing, working quickly and getting whiff after whiff in the process. In total, Twins hitters swung on missed on 12 of Kazmir's 95 pitches, but still Kazmir was efficient enough to take the Indians through six innings.

So although this wasn't a complete laugher like other wins in this now six-game winning streak, there were still several things to like, most importantly Scott Kazmir's pitching. Because if Kazmir can be a decent starter in the back end of the rotation, that's one more hole filled that existing at the beginning of the season.