Perez was placed on the DL this morning with "shoulder soreness."

I'm guessing the Indians did this before even making a more thorough examination of his shoulder. When a pitcher feels pain in his throwing shoulder, that's a big red flag. There should be more details forthcoming.

Nick Hagadone has been recalled to take Perez's spot on the 40-man roster. This is Hagadone's third stint with the Indians. At time he's pitched very well, but control problems had dogged him lately, which is why he was optioned to Columbus the last time (May 17). It has now been 10 days since Hagadone was optioned to Columbus, but even if had been 8 days, the Indians would have been allowed to bring him back because of Perez's injury. Since returning to Columbus, Nick's control problems have continued, with 4 walks in 5 innings with the Clippers. 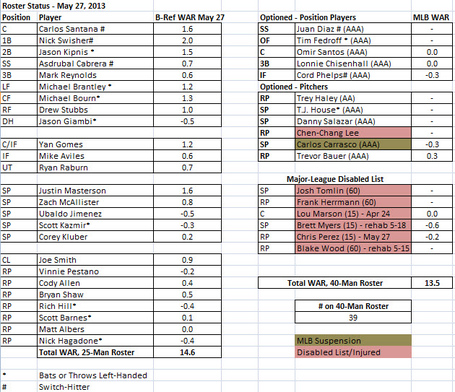 For now I've move Joe Smith into the closer's role because of the uncertainty surrounding Vinnie Pestano. I moved Cody Allen into Joe Smith's 7th inning role, and Bryan Shaw behind Allen. With Rich Hill being used so much lately, Scott Barnes may get some important middle inning action over the next couple days, and if that's a success, he could move into middle relief.