After Huff's performances in the Detroit series, the Indians decided that Scott Barnes wasn't so bad after all. This will be Barnes' third stint with the Indians this season, though he's had less a week of service time. With Rich Hill struggling of late, finding a second left-handed reliever is more important than ever going into the Boston series. Nick Hagadone was originally intended to be that second option, and he was sent back to Columbus last week, and now it looks like Barnes will get his shot. Scott's overall AAA numbers this year aren't great, but he's been pitching well lately, and well, there weren't many other options on the 40-man roster.

Because this is Huff's' second designation, he will have the option of refusing outright assignment if he clears waivers. If he does refuse assignment, he'll become a minor-league free agent, and can sign with any organization. I'm not sure how good the relationship is between Huff and the Indians, but regardless of what the player and organization thinks of each other, I think it's time that the two part ways. Huff has been in the organization for almost seven years now, with most of them as a starter, and although he's had success at the AAA level, that success just hasn't translated to the majors. Maybe some other pitching coach will have an idea as to how to make him into a major-league pitcher.

I also expect Nick Swisher to be activated from the Paternity List before tonight's game (with Cord Phelps going back to Columbus), and I'll add that notice when the move is made. Swisher will rejoin the Indians tomorrow, not today. 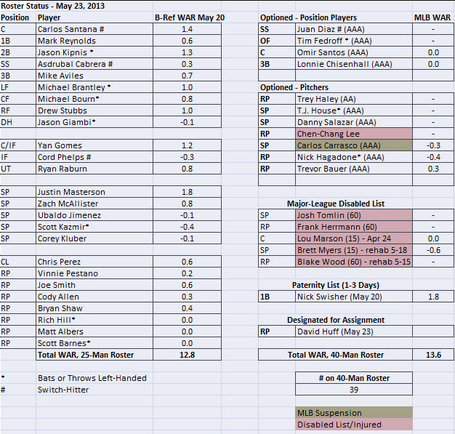