Nick Swisher will miss at least tonight's game, so Phelps is up to provide some infield backup.

The Swishers are now proud parents of a baby girl, and while Nick is away, Cord Phelps will give the Indians an extra infielder. The way the schedule works out you'd think Swisher would rejoin the team in time for the upcoming road to Boston and Cincinnati (a player can miss 1-3 games while on the Paternity List), so I don't expect Phelps to get any starts. In tonight's lineup, Mark Reynolds moves back to first base while Mike Aviles starts at third, and Jason Giambi gets the start at DH. And if Giambi can't go tomorrow, you could go with Santana at first, Reynolds at DH, and Yan Gomes at catcher. In other words, Phelps won't get any playing time unless it's as a pinch runner.

Cord Phelps has been hitting better in AAA. His batting line is .233/.318/.431 after really struggling out of the gate. He's played mostly first and second in Columbus, along with some left field. 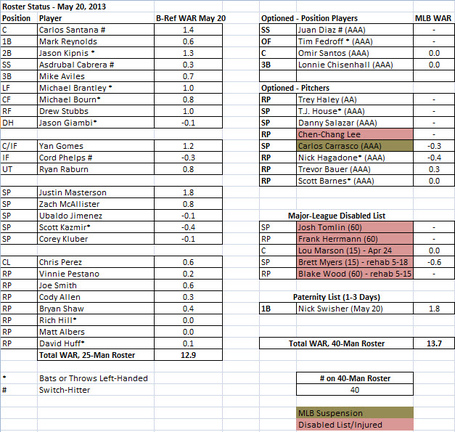