LGFT Ezequiel Carrera is brought back to serve as a short-term patch in the outfield.

Earlier today, the Indians optioned Trevor Bauer to AAA, but without a corresponding addition to the roster.

Given that the rotation and bullpen seems in relatively good shape, I expected the callup to be a position player; with Bourn still not ready for a while and Swisher down with a sore shoulder, the Indians were very thin in the outfield. Tim Fedroff would be a logical choice to serve as a short-term patch, but he hadn't been hitting that well (.238/.319/.307).

So the Indians grabbed an outfielder off waivers, a player very familiar to all of you:

#Indians claim OF Ezequiel Carrera off waivers from #Phillies; designate 1B Mike McDade for assignment.

(by the way I think @MLBRosterMoves might be the best Twitter feed out there for hardcore baseball fans. Having all roster moves in one place and updated in real time is just plain awesome.)

Carrera was DFAd just prior to the Phillies' series with the Indians when they activated Delmon Young from the DL. Most of you Carrera's career history, so I'll keep it short.

Ezequiel came up in the New York Mets system, was traded to Seattle in the three-way (with Cleveland) deal involving (among others) Franklin Gutierrez, Aaron Heilman, Joe Smith, Jason Vargas, and Luis Valbuena. Carrera was then traded from Seattle to Cleveland (with Juan Diaz) for Russell Branyan in 2010. From then until the end of Spring Training he moved back and forth between AAA and Cleveland, accumulating 384 Plate Appearances with the Indians in 2011 and 2012.

Carrera is a marginal major-league outfielder, and with luck will settle into a fourth outfielder role; he has some power, some speed, and can play all three positions, though he's only OK in center, and doesn't have enough of a bat for a corner spot. He's still only 26 years old, but out of options, hence all these waivers claims in 2013.

Swisher's shoulder injury was probably the main driver of this move. Had Swisher been able to play the outfield, the Indians would have been ok until Bourn came off the DL, but because it looks like he's limited to first base duties, the backup to Raburn in right was Mike Aviles, not exactly a wise use of roster resources. They could have brought up Cord Phelps for a bit, but again, Phelps is an infielder, not an outfielder. Fedroff was the only true outfielder on the 40-man, but as mentioned above, he hadn't been hitting in Columbus. Carrera gives the Indians four outfielders again, and will allow Francona the flexibility to give Drew Stubbs or Michael Brantley a day off if needed. When Bourn comes off the DL, Carrera will likely be placed on waivers again, and perhaps the Indians can sneak him through and send him to Columbus. And if someone else claims him, no big loss.

To make room for Carrera on the 40-man roster, the Indians designated Mike McDade for assignment. McDade had been claimed on waivers this past winter from Toronto, and had really been struggling (.230/.313/284) early in the season, though of late he seemed to have been better. Coincidentally (or not), the Indians today also activated Matt LaPorta, so the McDade DFA will give LaPorta the everyday job at first in Columbus. I don't think LaPorta has a major-league future, but perhaps the Indians thought there's a better chance LaPorta contributes at the major-league level than McDade.

Carrera got very sporadic playing time in Philadelphia (only 16 PA), and I'd expect that to continue in Cleveland. Ryan Raburn is going to play every day, at least until his hot streak ends, and both Stubbs and Brantley are everyday day players as well. Carrera will probably be used primarily to give Stubbs or Brantley a day off, especially with the Indians entering a stretch in which they'll play 14 games in 13 days. 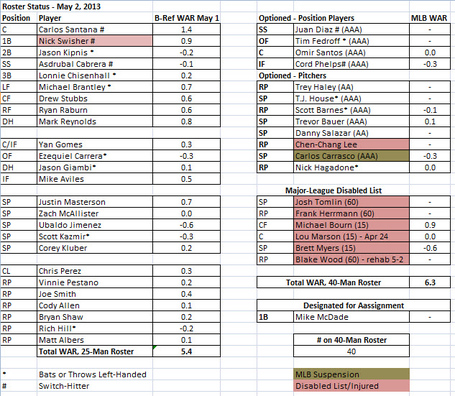 On an unrelated note, the Indians have sent Blake Wood on a rehab assignment to Akron (AA); Wood, who is recovering from May 2012 Tommy John surgery, was claimed by the Indians off waivers from Kansas City. He can be on assignment for 30 days; after that, he either has to be activated or taken off the assignment. Wood has an option remaining, but the Indians will need to clear a roster spot for him because he's currently on the 60-day Disabled List. A lot can happen in 30 days, as we've seen this April.