Just when you thought you've seen the last of David Huff, here he is again!

Because the Indians DFAed Ezequiel Carrera last week, no one will need to be removed from the 40-man roster to make room for Huff. Huff does not have any options remaining, so the Indians will have to get him through waivers when they remove him from the 25-man roster, and because they have already outrighted him once, Huff could elect to become a free agent. But that will be relevant later.

On an offense with almost everything clicking, Chisenhall has been the one player that hasn't hit. After yesterday's game, he's hitting .213/.253/.351 with 22 strikeouts and 3 walks. Because the Indians have other options (namely Mark Reynolds and Mike Aviles), they can upgrade the lineup by sending him down.

David Huff was outrighted at the beginning of the season after not making the club, and he has been pitching all right in relief in Columbus, striking out 28 batters in 24.1 innings. With the doubleheader today and with the bullpen used quite a bit last weekend, the Indians probably figured they'd need another arm just in case someone (Trevor Bauer) had a short outing.

Trevor Bauer has been recalled as today's 26th man to serve as Game 2's starter, and he'll go back to Columbus tomorrow. Huff may stick around until Vinnie Pestano comes off the DL. 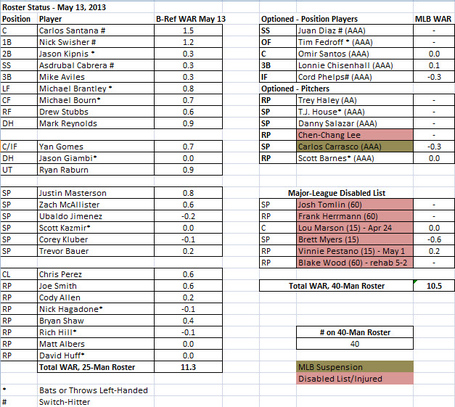