Trevor Bauer is going to get a second start.

Trevor Bauer making tonight's start has been an open secret for quite some time, and when he was pulled from his last start, that clinched things. Corey Kluber is already in the rotation, taking the place of Brett Myers, Carlos Carrasco has the suspension hanging over his head, and Dice-K hasn't been able to making consecutive starts without some kind of injury popping up.

This start will be again a spot start, meaning that he'll make the start tonight and go right down to Columbus. As mentioned before, he's barely pitched in the high minors (not even 180 innings between AA and AAA), and could use some less stressful innings to work on some things. But it's going to be a very cool thing to see him pitch tonight; he's the best pitching prospect the Indians have had in their organization since the days of Adam Miller, and Miller was never close enough to majors for us to even think him pitching for the Indians. That he's going to be pitching against Cliff, who is pitching against the Indians for the first time, makes tonight's game a bit more special.

Nick Hagadone is the one going to Columbus to make room for Bauer, but that should not be seen as anything against Nick; he has options, and he threw the last couple of days. You could see the writing on the wall when he came in to the game yesterday. 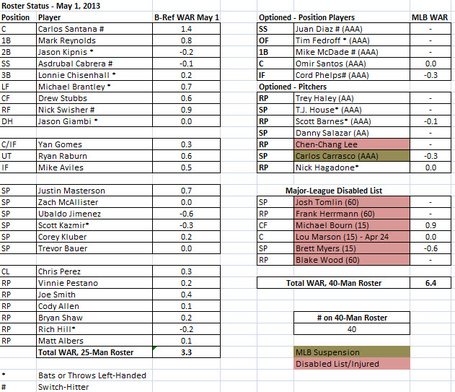