Even though Carlos Santana doesn't have a broken bone in his hand, he's still going to be out a couple days, so the Indians brought up not one, but both catchers from Columbus. Omir Santos and Yan Gomes are in Cleveland for tonight's game, with Gomes getting the start. To get both Santos and Gomes onto the 25-man roster, the Indians needed to clear two spots on the 25-man roster and one spot on the 40-man roster. One of those spots on the 25-man roster was already available when Trevor Bauer was optioned down, and the other was created when the Indians placed Lou Marson on the 15-day Disabled List (effective today because he played yesterday). To add Santos to the 40-man roster, the Indians Designated Robert Whitenack for Assignment (who was claimed on waivers just last week). Here's the various Twitter announcements:

Yan Gomes recalled and Lou Marson DL'd with a cervical neck strain. Gomes is in the lineup batting 9th tonight

Also CA Omir Santos has been selected to the Major League roster.Jason Giambi remains on the disabled list. Santos backs up Gomes tonight.

To complete moves made earlier today & make room for CA Omir Santos on 40-man, RHP Robert Whitenack has been designated for assignment 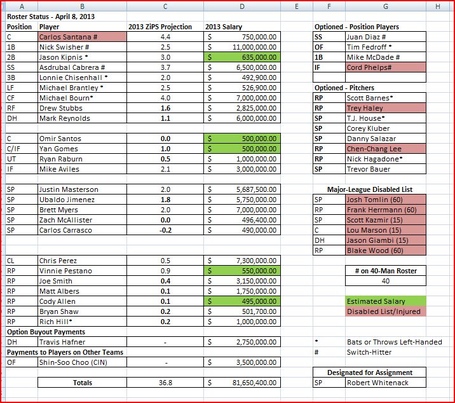 The Yankees lineup is practically identical to yesterday's starting nine except for the catcher, but the Tribe lineup is dramatically different; Bourn, Chisenhall, and Santana are out, Raburn, Aviles, and Gomes are in, and the order has been jumbled up as well. Stubbs hits left-handers very well, which is probably the main reason he's leading off tonight, which makes the rest of the lineup different; Francona likes to alternate right-handers and left-handers when possible.