The Indians have made their choice for today's 26th man, but they also made an unexpected roster move.

Scott Barnes is the 26th man today, giving the Indians a nine-man bullpen. He'll go back to Columbus after tonight's game, and will be eligible for recall if the Indians need him; the new CBA allows a club to add an extra player for a doubleheader without any subsequent restrictions (as long as the player is on the 40-man roster). This will be Barnes' first appearance with the Indians in 2013; he was acquired way back in 2009 when the Indians traded C/1B/"OF" Ryan Garko to San Francisco. He was once a starter, but the Indians converted him to a reliever last season. He's 25, but still counts as a PTM, and could be a key part of the Indians' bullpen by the time the season is over.

The Indians made another move unrelated to today's doubleheader; Lou Marson has been placed on the Disabled List just days after coming off of it, this time with inflammation in his right shoulder. Yan Gomes is back with the club after a couple games with the Clippers, and should get regular playing time, especially with Michael Bourn still out for a while. 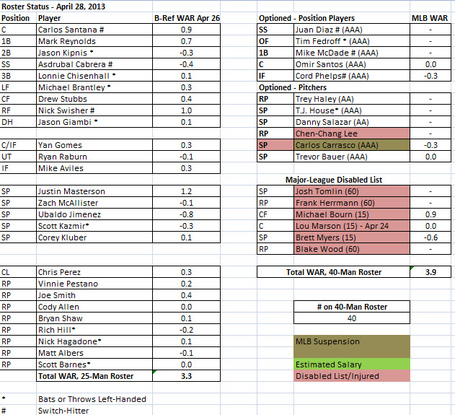