The full extent of Brett Myers' injury isn't known yet, but we do know that he'll miss at least the next two weeks. We also know that Corey Kluber will take Myers' spot in the rotation.

Zack Meisel of MLB.com has the story:

The revolving door that is the Indians' starting rotation has welcomed latest addition Corey Kluber, who will replace Brett Myers, who landed on the 15-day disabled list Sunday with right elbow inflammation.

Myers exited his start on Friday night in Houston after five innings and returned to Cleveland for an evaluation on Sunday morning. He complained of tendinitis in his right forearm following his outing, during which he allowed three runs and surrendered his league-leading 10th home run.

The injury was termed "right elbow inflammation," which could mean anything from a strain to just soreness. Myers hadn't had his normal velocity all spring, and although he continued to try to pitch through, it obviously wasn't working, both from a results standpoint and from a physical standpoint.

Corey Kluber, who pitched four scoreless innings last night, will move into the rotation, making his first start on Wednesday in Chicago. To help the bullpen, the Indians called up Fernando Nieve from Columbus. Because Matt Albers had been moved to the Restricted List a couple of days ago, the Indians didn't need to remove anyone from the 40-man roster to add "The Snowman". He's had some early success with the Clippers, posting a 1.38 ERA in 13.0 innings this season, and striking out 11.8/9 innings. 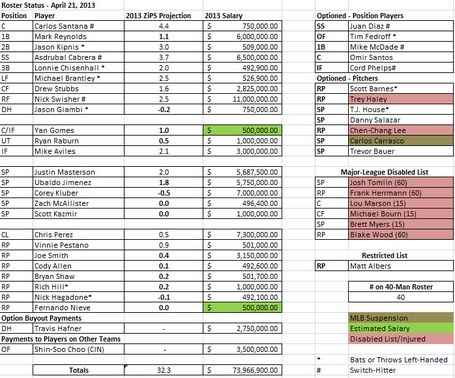