Scott Kazmir will finally make his Cleveland debut tonight, while Phelps' stay in Cleveland was a short one.

So ends the transaction saga started before Opening Day; Scott Kazmir has come off the Disabled List to make tonight's start:

Because Kazmir had to be added to the 25-man roster early, both Jason Giambi (DL) and Nick Hagadone (AAA) did not start the season on the active roster. Now all three are active for the first time.

What this means is that the Indians will continue to go with eight pitchers in their bullpen and three players on the bench. With Jason Giambi now in the starting lineup against right-handers, the Indians can get away with only three bench players because all three (Gomes, Aviles, Raburn) can play multiple positions.

Another roster move is looming, as Lou Marson can come off the DL in the middle of next week. It's likely that the Indians would option Yan Gomes to Columbus so that he can play everyday, though that will make the three-man bench tougher to maintain. With Michael Bourn out until the end of the month, they could elect to go with Tim Fedroff for a bit, or perhaps they could try to eke things out with a three-man bench until then. 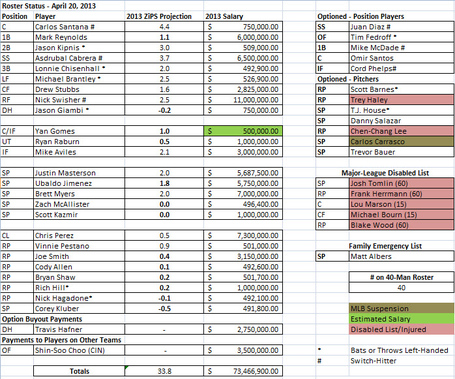