Another day, another transaction.

It turned out that waiting to place Michael Bourn on the DL was a good decision, because after last night's debacle the Indians suddenly find themselves with a thin bullpen. Because Corey Kluber was sent down less than 10 days ago, he could be recalled if he was needed to replace an injured player. Well, he's not going to replace Bourn in center field, but he will replace him on the roster.

I wouldn't read this move as a sign that Ubaldo Jimenez is out of the rotation, though. Kluber is here in case the Indians have to go to the bullpen early in the next couple days. Assuming Scott Kazmir has no setbacks, Kluber will be going back to Columbus prior to Saturday's game, which Kazmir is slated to start. Until then, I'm going to guess that the Indians will only use Kluber if it's a blowout and they need someone to eat some innings. 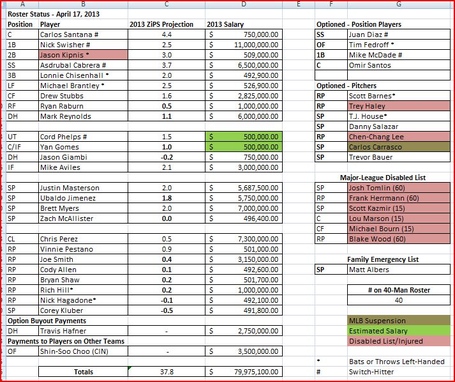