It's just a game...as it should be

The important unimportance of a baseball game.

Share All sharing options for: It's just a game...as it should be

This piece of the Internet is devoted to fans of a professional sports team. We're often serious about our Indians, and talk about trades and signings and games like they were the most important things in the world. But they really aren't. We have lives and families and friends and jobs that are way more important to us than whether the Indians win or lose.

But still, those three hours of baseball a night serve an important purpose; they help us for a time to forget about the controversies of that day. These daily diversions, whether it be a rock concert or a round of golf or a baseball game, give us enjoyment even if everything else that day was stressful or contentious. And if the day went well, then Indians baseball is the capper to a great day on this earth. That's why this place has conscientiously tried to keep out the serious news of the world, not because it's not important (it certainly is) but because having a place to forget the politics and cares of real life is important, too.

When the United States entered World War II, President Roosevelt enthusiastically gave the go-ahead to continue playing baseball, even with the deprivations that the country faced with its entry into war. Baseball, even played at a lower quality, was of vital importance to the nation precisely because of its unimportance; a baseball game was the perfect tonic for Americans after a long shift at the factory or after listening to the news from Europe and the Pacific.

By this time you've heard of the horrific events that took place at the Boston Marathon yesterday. Our thoughts and prayers go out to those who were affected by this tragedy. Last night the Terminal Tower in Cleveland was lit up in support of Boston, and before tonight's game with the Red Sox the Indians will show their support as well, as it should be. What better venue than a baseball game, unimportant though it be, to help begin the healing process? For although the events in tonight's game, whatever the outcome, cannot take away the pain from yesterday, it can at least help all of us, whether we root for the Indians or the Red Sox, enjoy ourselves for those three hours. 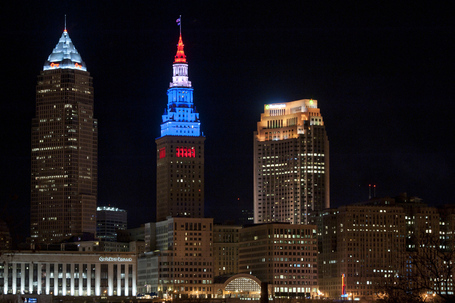