Whew! When the Indians announce moves, they come in bunches, don't they?

You knew the Indians would be making some moves after the rainouts; Corey Kluber wouldn't be needed with the consecutive rainouts and the off day on Monday, and Jason Giambi could be activated any day now.

But I didn't know that Matt Albers was about to become a father:

Kluber will go to Columbus and re-join the rotation; evidently the Indians feel that Scott Kazmir will be ready to go once the fifth starter's spot comes up again. I figured that Kluber-for-Giambi would happen, but with Albers leaving the team for a few days means that the Indians need a reliever. And so....

Thus correcting the series of moves that the Indians had to make to get Scott Kazmir on the roster early so that he could start his DL stint. Giambi, whose back has now miraculously healed, will join the team as the fifth man on the bench, and the addition of Hagadone will give the Indians a seven-man bullpen for the time being. Presumably Yan Gomes will be optioned out when Albers comes back, and a reliever optioned out when Kazmir comes off the DL. The three relievers still with options are: Nick Hagadone, Bryan Shaw, and Cody Allen. At this point I think Allen is the favorite to go to Columbus. 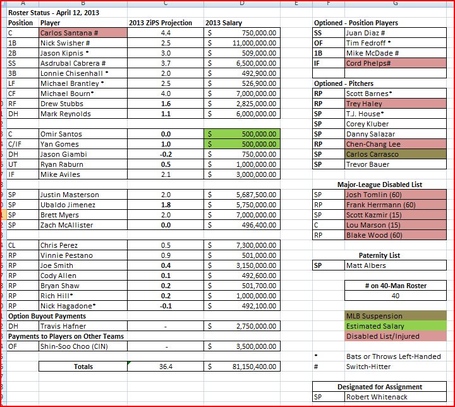