By Addie Joss, Compiled and Annotated by Rich Blevins. 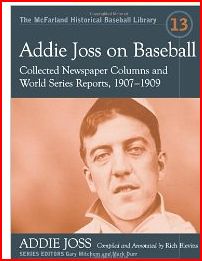 I'm not sure exactly how I originally came across this book on Amazon, which to my knowledge hadn't been advertised in any of my usual baseball haunts. Perhaps I was researching some information on another player, or maybe Amazon suggested the book.

Of course I immediately purchased it.

Beyond the obvious interest of Joss's newspaper column to an Indians column, Joss and his writing sideline has been known to regular readers for some time. Like most memes, "Addie Joss was a hack" wasn't started on purpose; it was a off-the-cuff retort by Jay to Chuck in a 2007 game thread, and it kind of grew from there. The phrase has some truth to it; during several offseasons, Joss was a regular columnist and sports editor for the Toledo News-Bee, a paper that was trying to compete with the dominant Toledo Blade. Nigel D. Cochran, the owner of the News-Bee, had gambled that bringing on Joss, a very popular player in his adopted home town, would increase the paper's circulation, and the gamble paid off in spades, with Joss's columns becoming a major draw to the city's rabid sports fans.

Joss would also write a series of columns for the Cleveland Press, the city's afternoon paper, and his reports on the 1907, 1908, and 1909 World Series be syndicated across the country. So in the span of three offseasons, Joss, would write not only about baseball for the News-Bee and Herald, but also about many other sports in his capacity as sports editor for the News-Bee. He stopped writing after the 1908-1909 offseason to open a pool hall in Toledo and participate in vaudeville with some baseball friends.

Because of his untimely death in 1911, Joss may be one of the least-known Baseball Hall of Famers. Not recognized as a great player during his playing career, by the time he was inducted into the Hall in 1978, he was practically unknown. The last living member of his family died decades ago, so his newspaper columns are the closest thing we'll ever have to a memoir of the great Cleveland pitcher.

Blevins, who typed out every column, divides Joss's writings into broad categories; for example, one chapter is about the ins and outs of playing the game, and another is out his historical writing on 19th century baseball. His World Series reporting is also included. Blevins provides many helpful annotations that gives the reader the context of each column. I purchased the Kindle edition of the book (currently listed at $9.99), and although it doesn't seem to work on my device, it's easily readable on my PC, with a clickable chapter of contents.