It's been obvious for some time that Chris McGuiness wasn't to make the Opening Day roster, but there was some hope held out for the Indians to work out a trade with Texas to keep the first baseman in the organization.

For those not familiar with how the Rule 5 process works, here's a quick overview:

Each winter, players not on their club's 40-man roster with either 4 or 5 year's minor-league service time can be added to other organization's 40-man rosters via a draft. However, there are some stipulations, and those stipulations tend to make it hard for Rule 5 draftees to remain with the club that pick them. The club that selected a player must keep him on their 25-man roster or on the Disabled List the entirety of the following season (and he has to be active for at least 90 days). After that, the club can option the player to the minors if they wish, and the player's original club ceases to have a relationship with the player.

It's difficult to keep a player who in many cases finished the last season in AA or even A in the majors for an entire season, and because the pool of players eligible has gotten a lot smaller (the years needed to be eligible were 3 or 4 years before 2006), very few players stick with the clubs that drafted them. Chris McGuiness, who played the entire 2012 season in AA Frisco, wasn't really for the majors, and after the Indians signed Michael Bourn, there wasn't a logical role on the bench for him. Had the Indians not signed Bourn, Nick Swisher would have been the right fielder, with Mark Reynolds at first base, leaving McGuiness a role as a part-time first baseman (with Reynolds moving to DH) and perhaps as a backup outfielder. But with Nick Swisher at first base, that removed any real need for a good defensive first baseman/left-handed hitter.

The Indians made their final 25-man roster decisions earlier this week, and those did not include McGuiness. So they first had to place him on waivers, allowing another club to claim him, with the same Rule 5 stipulations applying. No one bit at the waiver wire, so the Indians could either trade for McGuiness' rights, or if the two teams couldn't work out a deal, they'd return him to the Rangers for a nominal amount of money.

The latter is what happened:

On Wednesday, Cleveland returned McGuiness -- acquired from Texas during December's Rule 5 Draft -- to the Rangers for a cost of $25,000. The Tribe's 40-man roster now has 39 players, which potentially clears a spot for non-roster utility man Ryan Raburn to be added to the roster before Opening Day.

Had the Indians been able to work out a deal with Texas, they could have sent McGuiness to AA or AAA (most likely AAA, as Jesus Aguilar is probably starting in Akron) to share time at first with Mike McDade.

The Indians have a couple Rule 5 selections from their own organization out there still. Hector Rondon, who was selected by the Cubs, is probably going to make Chicago's Opening Day roster, and TJ McFarland is still in contention to make Baltimore's Opening Day roster. If I had to pick one player to stick, it would be Rondon; the reason he was available was injury, not ability, and the Cubs are very unlikely to contend. It will be trickier for McFarland to stick with Baltimore, though he'd have to adjust to a bullpen role, something he's never done before.

The Indians now have 39 players on their 40-man roster. They'll DFA David Huff soon, getting them down to 38, but will have to add Ryan Raburn and Scott Kazmir. They can also still move Frank Herrmann to the 60-day DL if they wanted to acquire a player or make a waiver claim over the next couple of days. 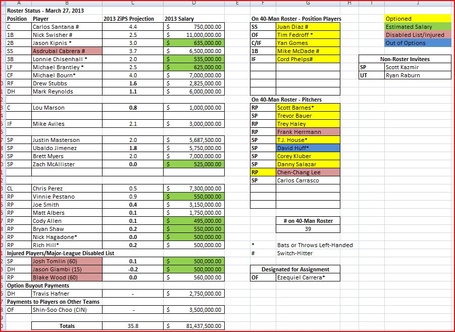