The Indians have announced their Opening Day roster, though they'll make a couple of changes after the season begins.

Let's take the moves by role:

Giambi had contract purchased, but placed on DL (back strain) and eligible to be activated on 4/9.

Herrmann placed on 60-day DL to clear room for Giambi on 40-man roster.

Raburn told he will be on roster. Phelps and Gomes optioned to AAA.

Once the roster goes back to a standard 13 position player/12 pitcher configuration, the bench will consist of Mike Aviles, Ryan Raburn, Jason Giambi, and Lou Marson. But because the Indians will initially be going with 13 pitchers and 12 position players, there will only be three players on the bench: Aviles, Raburn, and Marson. Giambi's DL stint allows the Indians to add him to the 40-man roster while at the same time allowing them to have a spot for the eighth reliever. Although based on the other moves, the bullpen might actually have 9 members for a while.

This means that Ezequiel Carrera will need to be traded or Designated for Assignment by the Opening Day roster is officially set, or sooner if his roster spot is needed before then.

Chris McGuiness is in the same boat, though due to a different reason. Because he won't make the Opening Day roster, the Indians need to pass him through waivers, then offer him back to Texas if isn't claimed. The Indians and Rangers then could make a deal, allowing the Indians to keep McGuiness without the Rule 5 restrictions applying (in other words, he'd be off the 40-man roster and could be sent to the minors). Or the Rangers could simply take him back for a small amount of cash.

Hagadone and Shaw informed they will be in Opening Day bullpen.

Both players are already on the 40-man roster, so no roster move is needed to get them on the Opening Day roster. The Opening Day bullpen:

This means that David Huff (out of options) will need to be traded or Designated for Assignment by the time the 25-man roster is officially set, or sooner if his roster spot is needed before then.

When the Indians activate Jason Giambi from the DL, one of Cody Allen, Brian Shaw, or Nick Hagadone will be optioned to Columbus to clear a spot on the 25-man roster.

As suspected, the Indians are going to get Carrasco's suspension over with to begin the season, then option him to Columbus after it's over with. Because Scott Kazmir is not a XX(B) free agent, the Indians can "send him to the minors" without having to pay a $100K bonus.The Indians will have to make some very short-term moves to bridge the gap between Kazmir coming up (the 6th), Carrasco going down (the 8th), and Giambi being activated (the 9th).

So, to recap, in sequential order:

7) A couple short-term roster moves to bridge the gaps between Kazmir coming up, Carrasco going down, and Giambi being activated.

Once all is said and done, this is how the 25-man/40-man roster will look when Jason Giambi is activated on April 9th (click to enlarge): 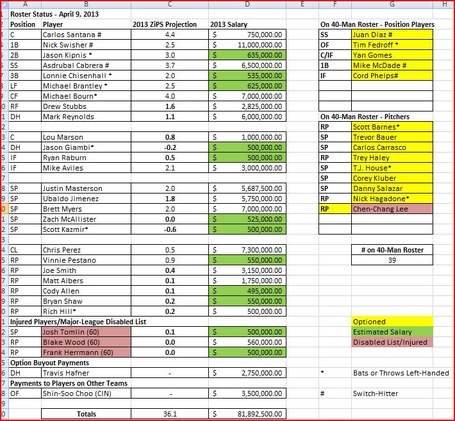 I assumed that Nick Hagadone would be the one going to Columbus, though it could also be Allen or Shaw.

The Indians would have 39 players on their 40-man roster after adding Kazmir, so they could claim a player on waivers if they were interested.