Francona Shifts the Defense to Make Room for Bourn

We've been speculating as to how the Indians will fill out their defensive lineup with the addition of Michael Bourn. It looks like Terry Francona has already come up with a plan.

Share All sharing options for: Francona Shifts the Defense to Make Room for Bourn

Adding Bourn will have a ripple effect on the alignment of Cleveland's defense.

On Tuesday, Francona met with Swisher, Mark Reynolds, Michael Brantley and Drew Stubbs to discuss the situation. Swisher will shift from right field to first base, Reynolds will assume the primary designated hitter duties and play first on a part-time basis, Brantley (Cleveland's center fielder last year) will move to left field and Stubbs (a center fielder by trade) will play right.

This obviously maximizes the Tribe's defense, while also leaving room for some late-inning substitutions. I'll take the players one by one:

Michael Brantley, LF. As hard as it may be to believe, he probably won't see much time in center field at all this season, Drew Stubbs will likely be Bourn's primary backup in center. Brantley may sit occasionally against a left-handed pitcher, but that would mainly be just the right situation for him to get a day off.

Michael Bourn, CF. His defense in center field is a very large part of his value, so he'll be in center exclusively. He'll only be out of the lineup when he needs a day off.

Drew Stubbs, RF/LF/CF. I think it's possible to make Stubbs into a valuable player, but his playing time will need to be managed right. He under no circumstances should ever be out of the lineup against a left-handed pitcher (career .276/.344/.476) and his at-bats against right-handers (.228/.301/.355) should be limited. But I don't think he should be strictly platooned, though; he's still a valuable defender and base runner.

Nick Swisher, 1B/RF. Swisher, when he's played first base, has been a decent to good defender there, and you'd rather him be available to move back to right field in late game situations without losing the DH. Depending on who they get to spell Stubbs against some right-handers, he'll either shift back and forth between first base and the outfield, or be a full-time first baseman.

Mark Reynolds, DH/1B/3B. Reynolds doesn't have a huge platoon split, but he hits left-handers better than right-handers, hence my leaving open the possibility that he can play some third base. Mike Aviles should get the lion's share of the backup duties at third, but if the Indians only carry one true backup infielder, he might need to play there from time to time. But Reynolds is going to be in the lineup for his bat, not his defense, so he should spend most of his time at DH.

There's two other pieces to this puzzle that will have to be figured out. Mike Aviles and Lou Marson already have bench spots locked up, but the other two positions are wide open. I think Bourn's signing makes Ezequiel Carrera expendable, as the Indians are certainly not lacking for center fielders or speed. Between the starting nine and the accounted for bench spots, the Indians have both a starter and a primary backup set at all eight positions, so the Indians can use those open spots for a limited role player (Jason Giambi, for instance) or to stow Chris McGuiness, the Rule 5 selection on the roster. I actually think McGuiness fits fairly well on this roster as an extra first baseman (if Drew Stubbs gets pinch-hit for late in a game, moving Swisher to right) or getting some starts for Stubbs against some right-handed pitching. But there will time enough over the next five or six weeks to break the NRI crop down.

Here's what the roster looks like now (or at least, when the Bourn signing becomes official): 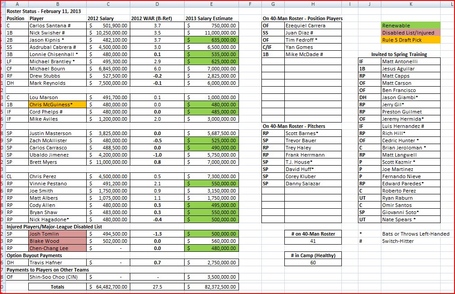