Did he actually make baseball more competitive with the multitude of changes in the past 20 years?

I know the rhetoric for an Indian fan is "Woe is us," as we cannot spend like the Yankees, Red Sox, or even the Tigers. And I do agree with that stance. But the corollary to that theme is that the teams with cash will almost always dominate as they can afford higher salaried players and even afford to miss on a few of those buys as well.

But as we watched the September pennant drive and the multitude of teams that were in the race until the final week, it dawned on me that the AL was very competitive as a whole this year. And when I reviewed the standings at the end of this past season, something jumped out to me. And it was the fact that seemed to be a lot of 90 win teams. So I decided to take a peek to see if this was indeed a trend.

The current divisional setup was created in 1994, when Cleveland joined the AL Central. Sadly that year ended in the strike, so I decided to focus from 1995 on. I know the first question, "But, wasn't 1995 also affected by the strike?" Yes it was, but since the final number of games was very close to a full season, prorating the numbers to a full 162 would not be a terrible idea.

Of course, there have been other changes with the scheduling in the past two decades. This includes interleague play starting in 1997. The reorganizing of the divisions occurred in 1998 when Tampa Bay and Arizona came online to make it a full 30 teams. In 2001, play within divisions was increased to 19 games per division rival, in addition to reduce multiple road trips to non-division teams. And of course, this past season with Houston flipping over to the AL and interleague play now happens all year long.

And with each change that has occurred, there seems to have been a leveling of the playing field. I will use 100 wins as the break off point as a truly dominant team and 90 wins to be an excellent team. From 1995 through 2004, there have been eighteen teams that won 100 games or more. But since 2005, there have only been 4, with the Phillies in 2011 being the last team to accomplish it. 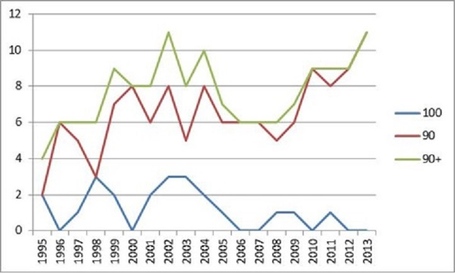 But this only looking at the positive side about the ledger. What about the horrid and bad squads for the same timeframe? Well, the 100 loss season doesn't have the same trend as 100 win season. Using the same break as above, there were 11 and 13 100 loss teams respectively, but never more than 2 since 2002. And if Houston actually tried over the past two years, I bet that number would have only been 1 each season. 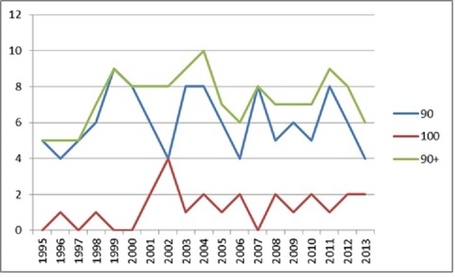 There has been a fairly even amount of teams over the past few years with 2013 being the lowest since 2006 and the 90 loss teams in steady decline the past three years. Let's do one more graph, just for kicks. 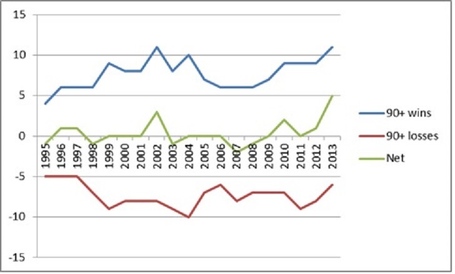 And here we can see that there has definitely been a trend up in the past few years, with 2013 actually reaching its highest peak of a net +5 teams. So, my initial reaction that 2013 was the most competitive in recent year did turn out to be accurate.

Is this sustainable? Highly doubtful as I think 2013 is most likely is the highest that peak can go. There just aren't enough wins/losses to be spread out much more. Also, this discussion does not by any means sway my opinion that a small market team like the Indians can have count on multiple 90 win seasons back to back to back to back. That is a different discussion entirely.