The deadline for exchanging salary figures has come and gone, and the Indians now have seven of their eight arbitration-eligible players signed for 2013.

All of the above deals came last on the heels of the club and player exchanging dollar figures as part of the arbitration process. Of the eight players eligible for arbitration, only Mike Aviles is yet to agree to a contract. It's now been more than two decades since the Indians actually went to arbitration with a player, and I seriously doubt that Aviles will the player that breaks the streak.

Four of the eight players eligible for arbitration were relievers, and if they had held onto Rafael Perez and Tony Sipp, six of their ten arbitration-eligible players would have been relievers. That's partly good and partly bad, as non-closer relievers tend not to get huge bumps in salary from year to year, even as they approach free agency. But on the bad side, it still means that the Indians are spending a larger percentage of their payroll on relief pitching. Joe Smith is a free agent at the end of the year, and he'll likely get his set-for-life deal somewhere else, and Chris Perez is headed that way after 2014. The good news is that relief pitching is one of the organization's strengths, with Cody Allen making his major-league debut in 2013 and CC Lee likely to make his debut this year if healthy.

The Indians and Masterson agreed to just a one-year deal, but that doesn't mean the door is closed on a multi-year extension; last season, the Indians avoided arbitration with Asdrubal Cabrera via a one-year deal, then got the extension done in spring training. Hopefully the same script applies with Masterson, who while not that effective in 2012 is still a valuable pitcher because of his ability to eat innings. The starting rotation is still by far the weakest spot on the club, and any further improvements the Indians make needs to be in concert with a Masterson extension. If everything works out, a healthy Carlos Carrasco and young Trevor Bauer will help get the rotation back to quasi-mediocre levels, and it would be nice to have those two plus Masterson and Zach McAllister locked up for the foreseeable future.

Barring a late winter signing, it looks as though the Indians will have an Opening Day payroll around $75.0M. That would represent a $10M increase over last season, and while that payroll will most likely still rank among the lowest in baseball but in the eyes of fans both die-hard and casual the increase is rather noticeable. The Indians did end up trading Shin-Soo Choo in anticipation of him leaving, but replaced him with a player that will end up more money in 2013. They could have traded both Asdrubal Cabrera and Chris Perez, but didn't, and so the 25-man roster isn't going to take a step back due to payroll considerations. That being said, payrolls don't score runs and prevent them; players do. 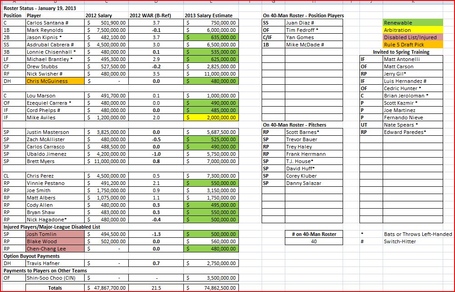 With Russ Canzler gone again, I've pushed Rule 5 selection Chris McGuiness to the DH spot, but only as a placeholder. If nothing changes, the Indians will likely rotate players in and out of the DH in order to take advantage of offense/defense or platoon spits, in addition to giving players a quasi-day off (such as Carlos Santana on Sunday afternoon). At this point I think Ezequiel Carrera has to lose his spot on the roster, as he's out of options and without a lot of 40-man competition with Neal and Canzler out of the way. If the Indians don't sign Jim Thome or bring back Travis Hafner, that last bench spot could go to anyone, whether it be infielder or outfielder.