Here's a handy graphical look at the Indians' projected 25-man roster, in addition to the NRIs and other players on the 40-man roster.

This roster is essentially a continuation of the offseason roster projections, though this one has some key differences. First, I've replaced the 2012 WAR with Fangraphs' ZiPS projections. Now the B-Ref and Frangraphs WAR are on different scales, so to help out I've highlighted the players that project to be less than what Fangraphs terms a "Solid Starter." For instance, Drew Stubbs projects to be 1.6 win player, which is in the Role Player category, but because he projects to be a starter, I've highlighted the number to serve as a warning.And the starting rotation, well, let's just say I hope the projections are wrong..... 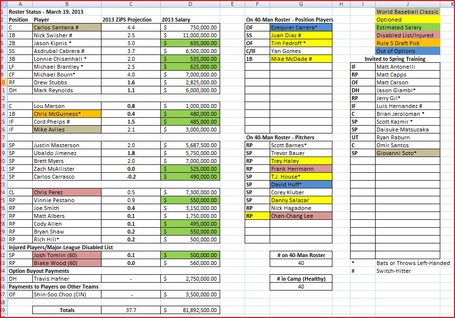 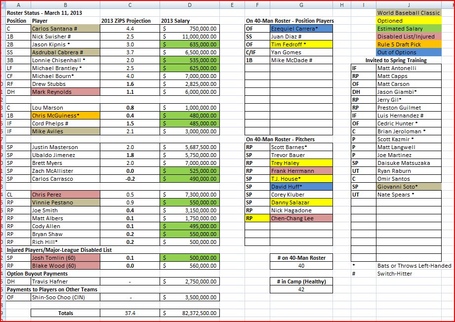 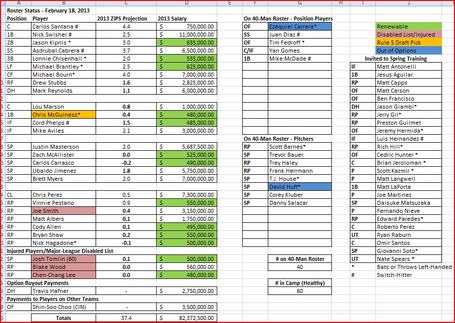 There's four color codes, so let me explain them:

1) Renewable (Green) - This notes that the player has a renewable contract and whose salary is not yet set for 2013. Hence what you're seeing is an estimate.

2) Disabled List/Injured (Red) - If a player comes down with an injury, I'll note it. As of now (February 19) there's three players who are either already on a Disabled List (Josh Tomlin) or would be if the season started today (Blake Wood and CC Lee), so they are listed in a separate category. I've also noted that Joe Smith is injured, but haven't moved him to the Injured Players category because the injury appears to be fairly minor.

3) Rule 5 Draft Pick (Orange) - This applies to just one player - Chris McGuiness. For the Indians to keep McGuiness, they have to keep him on the 25-man roster (or major-league Disabled List) throughout the 2013 season, or they have to offer him back to Texas.

4) Out of Options (Blue) - Players on the 40-man roster who are out of options. I believe there's only two of these guys (Ezequiel Carrera and David Huff). If these players do not make the 25-man roster, they will have to first pass through waivers, and then outrighted (removed from the 40-man roster) in order to send them to the minors.

I'll be updating this table as moves are made. This post will be pinned near the top of the page, so feel free to use this as a general roster discussion post.