Last time, we looked at the Indians' needs in the wake of declining Grady Sizemore's option. They would need to look outside the organization for a first baseman, left fielder, and at least one starting pitcher.

Share All sharing options for: The Lost Offseason: Payroll Considerations

But, as every move in baseball eventually comes down to money, it's necessary to look at what kind of payroll Chris Antonetti would have to work with. How the Indians approached free agency would differ greatly from a team with a larger payroll; Prince Fielder would certainly fill the first base hole, but his 2012 salary alone would put the Indians over their eventual Opening Day payroll.

From a flexibility standpoint, the Indians were in very good shape, as even with Travis Hafner's $13.0M salary, the 2012 guaranteed contract only totaled $24.0M. But the Indians still had to fill out a 25-man roster, and they had seven players eligible for arbitration. By my calculations, if the Indians had kept their 25-man roster intact, their Opening Day payroll would be about $54.2M 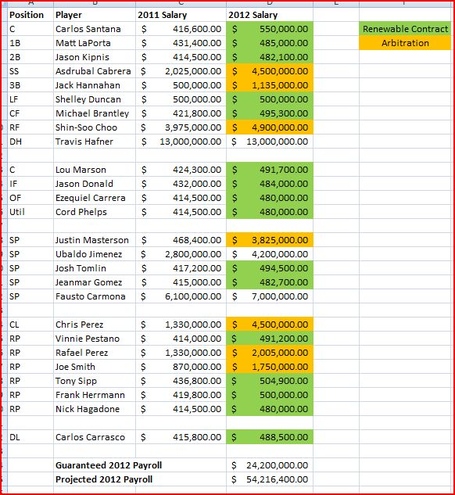 I used some hindsight, using the eventual arbitration salaries of the players that went that route. For Carlos Santana and Asdrubal Cabrera, who would eventually both sign long-term deals, I estimated their 2012 salaries if they hadn't signed the deals.

The major question was, as always, how much money the Indians front office would have to spend. This has been one of the sore points between the fanbase and ownership. Lately it's turned into chicken-or-egg arguments; the fanbase has generally said "I won't buy season tickets/come to the park" until ownership starts spending money, while the ownership behavior has generally been "We'll start spending when people start coming to the park," and hoping that the front office could put together a successful team on a relatively low payroll.

So even with a lot of player flexibility, it wasn't like Antonetti could get in on the bidding for the major free agents. In the best case scenario he'd have $16-18M to use to sign free agents or take on in trade salaries. That would take the Opening Day payroll to $72.0M, which would rank in bottom quarter of MLB clubs. And that $16-18M would likely have to be divided up two or three ways, so there wasn't much margin for error.

Next up: Free Agency