An Anarchist's Guide to Blowing Up The Baby With The Bathwater

Share All sharing options for: An Anarchist's Guide to Blowing Up The Baby With The Bathwater

When an AL Central team approaches the July 31st trade deadline barely over .500 having split its first 100 games a game under .500, yet still close to the division leaders despite a poor very bad horrible run differential, an understandable confusion clouds the minds of its aficionados. Is this the moment to invest fully in a playoff run, with the loss of future talent now being honed at Lake County or Akron? Is it the right time to pack it in until next year and spin off talent that's at a market peak, or talent that will be walking the FA walk in the near future, and audition those minor league tyros? Or do you stand pat, banking on your minions to play up to the level of talent you believe them to have?

There have been, of course, a lot of folks weighing in on aspects of this issue, from the DiaTriber to MLBastian; I thought I'd offer some historical perspective.

More words and charts after the jump.

Divisional play is still with us, so we don't have to worry about evil empires just yet—though nobody knows what lurks in the heart of Mike Ilitch. Since the demise of the Indians Juggernaut, what has it taken to compete in our maligned AL Central? Here's how ALC teams, in this case categorized by how much team WAR they've amassed, have performed over the last 10 seasons:

Well, that's pretty cut and dried, isn't it? Knowing this, putting together a winner should be a piece of cake.

Here's how the individual franchises have fared. The WAR numbers are the single season averages.

(Note: Since uploading the chart, I've discovered a small error: Minnesota's 10-year oWAR average should be 17.5, and tWAR—that's total WAR, the oWAR and pitching WAR combined—should be 34.7. Perhaps I'll get around to fixing it...)

Balancing your talent between offense and pitching is, no surprise, very important. There was only one ALC team in this decade to post 20+ WAR in both the hitting and pitching categories—that would be your 2007 Cleveland Indians—but 11 teams put up 15 WAR in both, and those teams averaged 91 wins and compiled 7 divisional titles and the ALC's lone wild card spot. The other three division winners reached double digits in both categories, and each had at least 24 WAR in one of them.

A dozen teams had 20+ WAR in one category, and a single digit total in the other; the best of them, the '07 Tigers, won 88 games, but the overall winning percentage of these teams was .482, with nobody involved in a pennant race down the stretch. 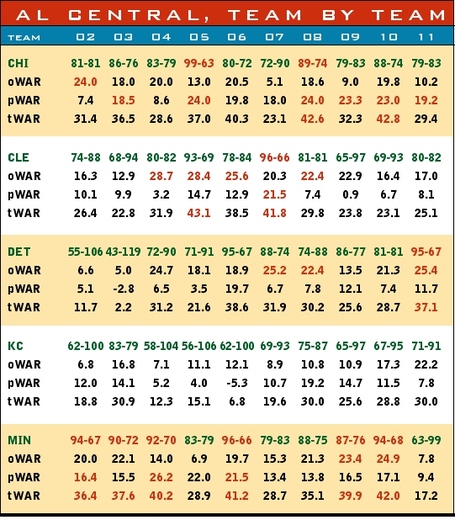 So what are the prospects for the Indians? Here's a look at their starters, with their 2012 WAR projected totals, and then guessing their values through their club control years. I've not bothered to carry over guys like Tomlin and Zach McAllister, because projecting values for them is, as with most pitchers, a dicey proposition; suffice to say, they're under club control for a long time to come, and pencil in any values you think likely. 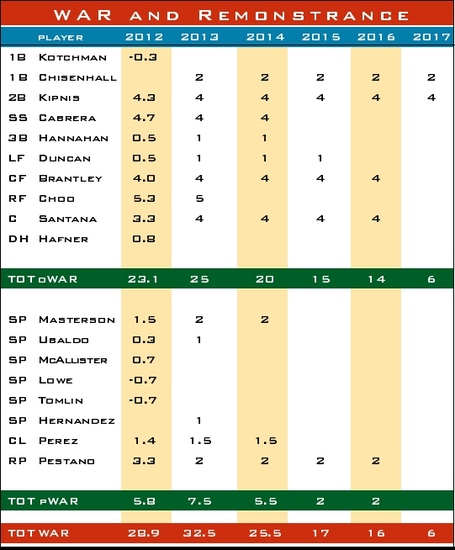 This seems to me to be a team with a very solid core, at least offensively, and I'd put the Molotov Cocktails back on the shelf in the garage, for the moment. Starting pitching is thin; maybe I've been conservative with Masterson and Jimenez, but they've not given me too many reasons to be extravagant in my projections.

Vinnie Pestano has handled LHB with aplomb, of late, and I don't think there's any reason he can't close out games. Perez is, in my opinion, fun to watch, an exuberant and challenging personality, and a bit redundant on a team that can't deliver a lead to its backend pen to save its playoff life—but if he goes, I certainly hope some pitching comes back. As for Kluber, the various TJs, the fluttering Steven Wright? It might be time to start auditioning one, or some, of them. Especially if we can bottle some of whatever the White Sox give their MiLB arms.