Cleveland was looking to come out of Tampa with a strong, and much-needed, 3-1 series victory. The game was also an opportunity for Ubaldo Jimenez to bounce back from his horrific July 14th start in Toronto, in which he failed to get out of the third inning. Facing off against the Tribe was David Price, who entered the game with a career ERA versus Cleveland just a hair over 2.

After Price retired the Indians in order to start the game, Ubaldo gave us a typically Ubaldo inning:

Six batters, two hits, a walk, two strikeouts, 23 pitches, three men left on base and a 0-0 tie to end the inning. The game stayed scoreless until the bottom of the 3rd, when Luke Scott connected off Jimenez for his 13th HR of the season, three of which have come against Cleveland this month. Outside of Tampa's series with Cleveland this month, Scott's last hit was a June 1st single against Baltimore.

The Rays were in position to broaden their lead in the bottom of the fourth, following a leadoff walk to Desmond Jennings and subsequent Jose Molina single, moving Jennings to third. Sean Rodriguez's attempt to bunt Jennings home went right back to Ubaldo, who was able to throw the advancing Jennings out at the plate. The next batter, B.J. Upton, promptly hit into an inning-ending double play to end the threat.

The collective luck of the Tribe and Ubaldo ended in the sixth inning, however, as the Rays rallied for four runs with two outs, knocking Jimenez out of the game. After recording two easy outs to begin the inning, a nasty sequence of HBP, single, walk, double, single, plated four Rays. Facing Scott Barnes in the 7th, Luke Scott again showed his prowess against Cleveland pitching, hitting a leadoff double before coming around to make it a 6-0 Rays lead.

The Indians offense was unable to get off the ground for the remainder of the game, finishing the game weakly with three straight strikeouts.

Up next is four games with Baltimore at home. 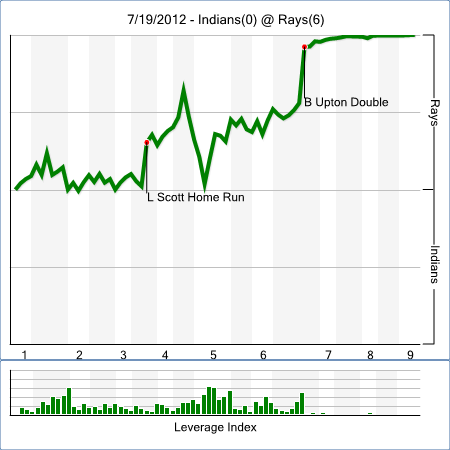