The Clippers opened up the second half of their season with a doubleheader split. Corey Kluber (6IP, 3H, 1R, 3BB, 6K) and Cody Allen teamed up for the opening victory. Chris Seddon, Dan Wheeler and Matt Langwell (2IP, 1H, 0R, 0BB, 4K) went seven innings of one-run ball, but Tyler Sturdevant, making his debut for Columbus, allowed a run in the bottom of the 8th to end the game. Ezequiel Carrera got on base five times and stole three bases across the two games. Cord Phelps (2-3, 2B) and Matt Pagnozzi (2-run HR) provided the bulk of the offense in the victory.

The Aeros could only muster 3 hits on offense, squandering a set of strong pitching performances. TJ House had one of his longest outings of the season, going 7.2 innings, allowing just two runs while striking out 8. After getting off to a strong start in Akron, this outing comes at a much needed time for House, having allowed four or more runs in four of his last five starts. Preston Guilmet failed to holding the tying run in the 8th, but pitched a clean 9th inning. Rob Bryson pitched the 10th and 11th without allowing a run. Jose De La Torre (7-1) picked up his first loss of the season with help from a botched fielding after at third from Davis Stoneburner.

Bo Greenwell (3-5, 3B) continued his hot hitting for the Mudcats, but J.D. Reichenbach could not hold on to a lead in the 8th. Tough night for Ronny Rodriguez, going 0-4 with 3Ks. Carolina stranded 11 runners in the game, going 1-10 with RISP in the process.

Jordan Smith (2-4, 3-run HR) homered in his second consecutive game, but Enosil Tejada was unable to hold the lead in his full-season debut (Tejada had a 1.74 ERA in ten Mahoning Valley appearances). Lindor was 1-4, Luigi Rodriguez was 0-1 with 3BBs.

I was at this game, and it was ugly. Poor defense from Joseph Wendle at third, swings and misses up and down the lineup (Juan Romero was 0-4 with 4Ks), and a sinker that didn't sink after the first-inning from Scrapper starter, Ryan Merritt. Not a great way to celebrate Peter King bobblehead doll night. 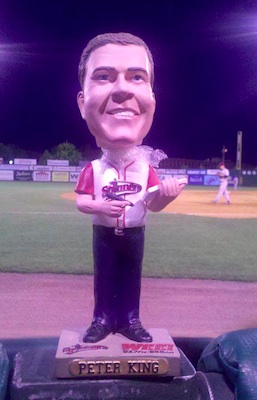