Share All sharing options for: Johnny Damon has landed

I am in Arizona with my family visiting my parents for spring vacation. I decided to stop by the Peoria sports complex with my son this morning to try and catch a little extended spring training action, and lo an behold, the Mariners were playing Cleveland. Adding further happy circumstance to the day, Johnny Damon was making his debut with the organization. After hitting a groundball single up the middle, Damon was removed from the game to do some work on the side, but also graciously posed with my son for a photo. 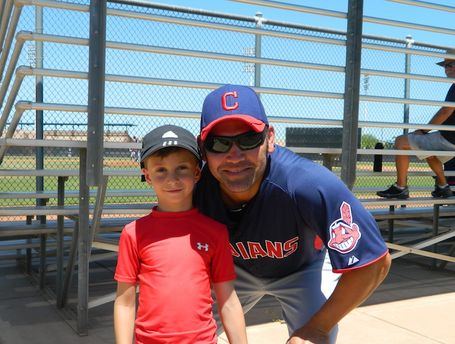 Regardless of how I felt about the Damon signing before, I am certainly a fan now. Damon, while on the bench, was also the first to get up and congratulate Dorssys Paulino when he came around from second to score on an Eric Haase single. I don't have much else to say about the game (watching a game with a 7-year old isn't ideal for close inspection), but Paulino was 2-2 and roped his first single to RF. Robbie Aviles lacked control, but when he threw his fastball for strikes was clearly overwhelming the guys he faced, and Jeffry Cleto, who is listed as 6'3" 190, is clearly bigger than that (primarily in his thighs) and throws hard (Steve Karsay seemed impressed).