The Age of the Indians

Share All sharing options for: The Age of the Indians

Joe Posnanski has a column up today talking about issues related to age and player development. This got me thinking about the age of the Indians lineup, and particular how the projected starting lineup sits relative to the perceived prime age range of 25-30. After putting together the average age of the Indians starting lineup, by position, from 2004-2012, I do not really have anything particularly insightful to say. The Indians should be pretty well positioned in the peak of the production curve this year, but they pretty much have been there throughout this time period. If all goes as projected, the Indians might go through 2012 with a full seven of the nine lineup spots occupied by a guy aged 25-30 on a regular basis, which would be matched only by 2008. 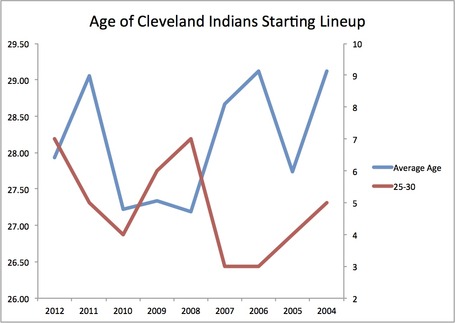