A look at the Reynolds signing, as well as the move the Indians made to get him on the 40-man roster.

After a year of Casey Kotchman at first base and no player in the system that can play at everyday at the major-league level, this was a signing the Indians had to make. First base was a black hole last year, as explained in great detail by Jason, and the guy who was supposed to be manning the position by then had become a complete bust.

So the Indians were out on the free agent market. Their first target was Kevin Youkilis, who played for Terry Francona in Boston, but he turned down the Indians' two-year offer in favor of a larger AAV in New York on a one-year detail, banking that he'd have a successful 2013 and get a more lucrative deal next winter. The Indians then went immediately to their backup plan, which was Reynolds.

Mark Reynolds was selected by the Arizona Diamondbacks in the 16th Round of the 2004 draft; he played shortstop for Virginia because Ryan Zimmerman had been moved to third base. His (lack of) defense and (lack of) athleticism apparently didn't excite many pro clubs even with the prodigious power numbers at Virginia, but his bat translated to professional baseball, and that made the Diamondbacks try to find a place for him on the diamond. He split time between shortstop and third base his first couple years in the minors, then played some outfield and first as he reached the upper minors. When he reached the majors, he was moved permanently to his original college position, third base.

Reynolds had defensive problems at third base, but his bat more than up for it; as a rookie, he hit .279/.349/.495 with 17 home runs, and in his first full season hit .239/.320/.458 with 28 home runs. He would lead the NL in strikeouts that season, the first four straight seasons. The comparisons to LGFT Russel Branyan immediately leap to mind; like Branyan, Reynolds came up a third baseman who was marginal defensively and struck out a lot but had prodigious power. Mark will walk quite a bit, which is probably the main reason he's been able to remain a viable offensive player.

Arizona dealt Reynolds to Baltimore following the 2010 season (in which he hit .198/.320/.433 with 32 home runs). The Orioles started to play him at first base in 2011, then moved him there full-time in 2012. He continued to hit for power, hitting 23 home runs (which would have led the Indians) and 26 doubles. The Orioles non-tendered him to avoid paying him a 3rd-year arbitration salary, and the Indians scooped him for a base salary of $6M and $1.5M in potential incentives.

You're not going to get much defense from Reynolds, or contact, or base running. You're going to get power, some walks, and that's about it. But for $6M, that's a decent deal. The Indians are banking that McGuiness, McDade or even Jesus Aguilar turned into a viable major-league player by the end of 2013, ensuring that they wouldn't have to look for another band-aid at first next winter.

I didn't expect this. After a nice 2012 season in AAA, Canzler held his own in Cleveland in September, and looked to be making the roster even with the Reynolds signing. Yes, he's going to be 27 next season and has only 102 major-league plate appearances under his belt, but I think he could have contributed to the club. The Indians still have two gigantic holes in batting order positions that demand power; right field, and Designated Hitter. If the Indians sign Nick Swisher, they'll have fill the right field spot, but there will still room on the roster for another power bat.

Canzler may have lost out to Rule 5 selection Chris McGuiness, but what if McGuiness doesn't impress in Spring Training? What then? The Indians have waiver claim Mike McDade on the roster, but that's it for first basemen. And McDade is only a first baseman; he couldn't serve as a fifth outfielder, as Canzler would have done. The Indians have got rid a lot of their dead wood already (especially in the Choo-Bauer deal), but they still could have tried to sneak Blake Wood through, or cut bait on David Huff.

Perhaps all these words could come to naught if Canzler passes through waiver unclaimed, but I think someone will claim him given the shortage of corner bats on the free agent market and his low service time.

With the addition of Reynolds and subtraction of Canzler, I've moved Yan Gomes to DH for the time being. Ezequiel Carrera is listed in right field, but hopefully by this time next week he'll have been relegated to the bench. The infield looks like it's set, but there's still a lot of work to be done in the outfield and the rotation.

The payroll by my estimate is $54.26M, which in theory should give the Indians another $20M to spend this off season in free agency or in adding salary via trade. They won't be able to sign both Nick Swisher and Edwin Jackson, but should allow them to add one of those two. 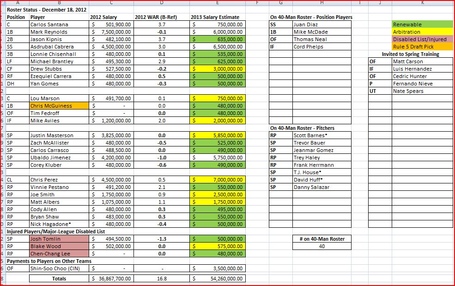