The Indians made their first acquisitions of the offseason, claiming one reliever on waivers and trading another one for two potential role players.

Blake Wood was drafted in the third round of the 2006 draft, struggled as a starter after getting to AA, and then found his niche as a reliever. Wood was a decent reliever for the Royals in 2011 before missing the entire 2012 season due to Tommy John surgery. Before the surgery Wood was a fairly typical fastball/slider right-handed setup guy; he threw the fastball in the mid-90s, and the slider in the high 80s, so there wasn't that much of a velocity difference. Still, Wood managed to strike out 8 batters per 9 innings in 2011, and more importantly kept the ball in the yard, allowing just 5 home runs in 69.2 innings. He did walk 4.1/9, so that will be something to watch out for, especially as control is one of the last things that come for a pitcher coming back from Tommy John surgery. Wood had the surgery in May of this year, so he'll likely miss at least the first couple of months of the 2013 season.

Wood is eligible for arbitration, which is probably the main reason the Royals tried to sneak him through waivers. Though he shouldn't cost the Indians that much, given his year off for the surgery. When he's healthy (more likely June than May), he could fill the role that Esmil Rogers did last year; a sixth inning/seventh inning reliever with a lead, or an eighth-inning/ninth-inning guy with a small deficit.

So much for the Rogers-to-rotation theory I was trumpeting; the Indians decided that it was time to sell on Rogers. The acquisition of Rogers (for an undisclosed amount of cash) was one of the best moves of the 2012 season, and just a couple months after acquiring him, the Indians traded him for a player (Aviles) that at the very least will be a utility player and another that could serve as hybrid backup catcher/corner bat.

First, let's talk about Mike Aviles. He didn't make it to the big leagues until age 27, having spent 4.5 seasons in the minors. He originally just played shortstop in the minors, but then started playing other infield positions as a way to get to the majors. From 2008-2011 he was a super-utility guy, playing about every other day for the Royals at second, short or third. He was dealt to Boston at the 2011 trade deadline, and continued that role with the Red Sox, and even played some outfield. He hit very well down the stretch for Boston, hitting .317/.340/.436 in 101 Plate Appearances.

After the 2011 season, the Red Sox dealt their starting shortstop Marco Scutaro to Colorado and didn't acquire a replacement, so for the first time in his career Aviles was an everyday player at one position. Although he was fine defensively, he wasn't a very productive hitter. He did hit 13 home runs but that's about all he did; he hit .250/.282/.381, and by the time the season was coming to a close was riding the bench as the Boston was trying out Jose Iglesias.

So it was no shock that Boston dealt him after the season, but the circumstances were strange. Even before Bobby Valentine was officially fired, the rumors were rampant that Toronto manager John Farrell wanted the Boston job, even though he was still under contract for the 2013 season. As it turned out, the Blue Jays didn't want Farrell, and ended up trading him to the Red Sox for Aviles before the World Series.

Aviles is eligible for arbitration for the second time, and he'll likely make around $2.0M or so for 2013. He was rated very well defensively at shortstop, and at the very least he'll give the Indians an actual backup for Asdrubal Cabrera; last season Cabrera seemed to wear down as the season went on, so Aviles should help keep him fresh. If the Indians do deal Cabrera, Aviles could be a decent stopgap if needed, but I don't see this acquisition as a precursor to any further trades.

If Aviles is a bench player, he'll be an upgrade over what the Indians ran out there in 2012 (namely Jose Lopez and Brent Lillibridge). He obviously has some pop, can play second, short, and third well, and could even play the outfield if absolutely needed. Hopefully the Indians jettison Lillibridge and pair either Cord Phelps or Jason Donald with Aviles on the bench now that have a true backup shortstop.

Yan Gomes is a somewhat interesting player, but has some serious flaws in his game. He's primarily a catcher, but has played the corner infield spots. He has good power, though given his short time in the majors, there's a lot of holes in his swing. If you squint you could see a Shoppach-like career for Gomes, as he is a legitimate major-league catcher, and that's what the Indians are hoping for. I think it's likely he'll go to Columbus, play mostly behind the plate, and get the call if either there's an injury or Lou Marson continues to struggle behind the plate.

When he was called up this past season, he became the first Brazilian native to play in Major League Baseball, which is pretty cool. He'll play for Brazil in the 2013 World Baseball Classic.

So here's an updated view of the 40-man roster, which now stands at 40. 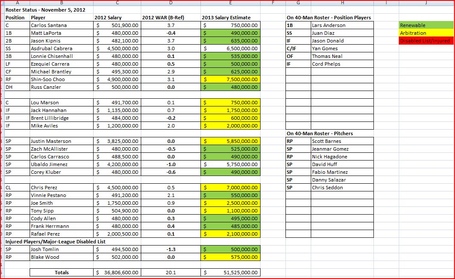