Later tonight I'll recap the moves over the weekend, but let's first recap what the Indians roster looked like after free agency and the team's option decisions.

With this being the first transactions recap of the offseason, let's first take a look at what the Indians started with after free agents filed and options were either picked up or declined.

(click on the player's name to go to their 2012 in Review post, if one was done for them)

New pitching coach Mickey Callaway is going to have his work cut out for him, trying to not only turn around talented pitchers like Jimenez and Masterson, but also to work Carlos Carrasco back into the rotation after Tommy John surgery and to try to help Zach McAllister establish himself as a major-league starter. Hopefully that will change as the Indians get further into the offseason.

The story of the last five seasons can in some way be tied in with Sizemore, Hafner, and Carmona/Hernandez. Five years ago, these players made up a large chunk of the core of the team. Sizemore was the best player on the roster, Hafner one of the best hitters in the American League, and Hernandez (then of course know as Fausto Carmona) coming off one of the best pitching seasons in Indians history.

The past five years should have been seen the primes of their careers, but for the most part were marred by injuries (Sizemore, Hafner) or bad pitching and legal troubles (Hernandez). These players were all signed to long-term contracts; the Indians were banking on these players to be the core of the 2008-2012 clubs. It didn't happen, which is why there will be no wailing when any of these players sign with another club. Officially it's the end of an era, but that era really ended long before last week.

Also, the Indians removed three players via the outright process:

None of these were surprises. Slowey would have been eligible for arbitration this winter, and he barely pitched for the organization in 2012. Rottino is a minor-league soldier who doesn't really have a place on a major-league roster. And Scott Maine, while he's left-handed, was awful in his appearances with the Indians. Again, no big losses here.

So, here's a chart showing the roster/payroll status as of November 1: 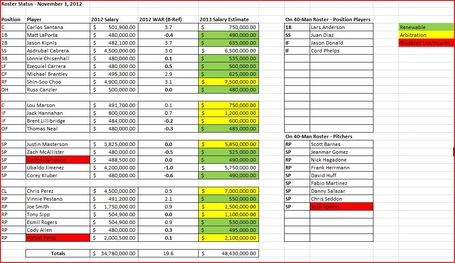 Let me take you through the chart quickly. This is meant to be the 25/40-man roster if the season began that day. For those on the 25-man roster, I've listed the player's 2012 salary, their 2012 value (in B-Ref WAR), and their 2013 salary status. If the player's 2013 salary is not finalized yet, the salary is estimated and highlighted - green for a pre-arbitration (or renewable) status, and yellow for an arbitration status. If the player is either on the Disabled List or injured, I've highlighted his name in red.

Anyway, as you can see, there's a lot of work to be done. Holes (WARs below 2.0 for position players/starting pitchers and 0.5 for relievers) are numerous, including the entire rotation, first base, left field, and the DH spot. Now for the first time in a decade the Indians probably won't have a dedicated DH, so I'll use the top bat on the bench for now; as of November 1st, that was Russ Canzler.

The good news is that the Indians have some payroll flexibility. They should have at least $20.0M to spent this offseason (their 2012 Opening Day payroll was $65.4M), and could save some money without drastically affecting their ability to win if they deal Chris Perez.

Look for another installment tonight that covers the Wood claim and the Rogers for Aviles/Gomes trade.