A look at the players the Indians added to their roster, as well as who they had to let go to room for the additions.

Tim Fedroff is on the cusp of making the majors after a nice season in Columbus, but his upside is probably more as a platoon/fourth outfielder than a starter. If the Indians don't bring in an outfielder, then yes, Fedroff is going to be in contention to start in left (or right if the Indians trade Choo), but if that's the case, it's going to be a long season. What's a more likely scenario is that Fedroff gets a lot of playing time in spring training, goes to Columbus, and gets the call if there's an injury at the major-league level.

Lee is still recovering from Tommy John surgery; if he had been healthy last year, he might have gotten the callup along with or even before Cody Allen. As it is, he could be ready to pitch in games in May and June, and if everything goes well, could get a shot with the Indians in the second half of the season.

Trey Haley has by far the most upside of this group. The Tribe's second round selection in the 2008, Haley has struggled to stay on the field, and was moved to the bullpen in 2011. Haley's just 22, so if the hernia surgery finally fixed things, he could theoretically move back to the rotation. Haley's stuff is outstanding; he has two plus pitches (upper-90s fastball and fantastic curve). Command of those pitches has been an issue, though, so I don't expect to see him making the jump to the majors right away, but if he puts things together now that he's completely healthy, he could be next year's Cody Allen or if things really go right, a power arm in the rotation.

T.J. House is one of the system's best starting prospects, though that doesn't mean he'll show up on any of the Top 100 prospect lists this winter. He did have a nice Arizona Fall League, striking out 26 and walking just 27 innings (3.00 ERA). He'll most likely start 2013 in Columbus and could see time in Cleveland given how thin the Indians are in the rotation.

The best player left unprotected by the Indians is Jesus Aguilar, the first base prospect who had an excellent year between Carolina and Akron. But power-hitting corner players usually aren't selected in the Rule 5 draft, especially ones that are tied to just one position (first base).

Outrighted 1B Matt LaPorta and IF Brent Lillibridge to AAA (Columbus)

Martinez should clear waivers and be outrighted to the minors; he struggled with his control in his short stint with the Indians, and continues to be a project.

Although it's not completely over for Matt LaPorta with the Indians, the fat lady has begun to clear her throat. LaPorta was called up in September, but only after the Indians passed up multiple opportunities to bring to the majors. And even when he was called up, he didn't play nearly as much as Russ Canzler, his main competition at first base. The Indians still desperately need a first baseman, but it's apparent now that LaPorta isn't a major-league hitter. He struck out 17 times in 60 major-league plat appearances in 2012, walking just once. If you look at his major-league career, the rate is working out to roughly 1 strikeout in every 5 plate appearance. There have been players who have had excellent careers with those rates (Adam Dunn for one), but Dunn had a good eye at the plate while LaPorta just doesn't.

Brent Lillibridge will likely refuse his assignment and look for a major-league contract somewhere else, or failing that, an invitation to someone's spring training. The Indians upgraded their infield defense with Mike Aviles, and Jason Donald can fill in the gaps in the infield and outfield at a much cheaper salary than the Indians would have paid Lillibridge, who is eligible for arbitration.

Here's the latest look at the 25-man/40-man roster. There's still a lot of gaping holes at the major-league roster, and although the 40-man roster is full, there's several players (David Huff, Chris Seddon, Jack Hannahan) that could be let go with little to no loss. 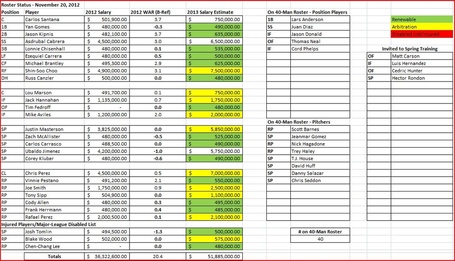