Share All sharing options for: Where the wins come from (v.2012)

Just over a year ago I wrote a piece here asking where the wins would come for a team that had won just 69 games and then made very few significant offseason additions. Perhaps not surprisingly, the same question could be asked today, although of a team that surprised many by starting strong and, despite some struggles late, winning 80 games. First, it is worth noting that the Indians ended up performing pretty close to what I had identified as a best case scenario, though by a slightly different route than I had anticipated. Here is what I wrote last January:

A reasonable high-end scenario for 2011, where some, but not all things work out for the Tribe, has them close to an 81 win team, with a few breaks taking them to the mid-80s. This scenario would put Cleveland into a strong position heading into next off-season, with internal prospects likely in place to fill in the gaps and good incentive to add payroll via a key free agent signing heading into 2012. Here's to hope (and wins)...

Way to go me! Although the Indians accomplished this in ways I did not exactly anticipate. I correctly noted that Asdrubal could be a big part of an improved 2011 squad, that a full season of Santana would help a lot, but struck out on several other areas. Here is how my predictions stacked up against the reality of 2011 (Note: Last year I used fangraphs WAR totals. Based on personal preference, I am using B-Ref's numbers this year)

What follows is something akin to a back of the bar napkin look at the 2012 Indians, based on their 2011 performance and offseason moves.

Choo was a surprise, and not the good kind, last season. Given his track record, he seemed the safest bet to make a solid individual contribution. Going into 2012 a reasonable project would seem to be something like +3-4 wins, although the high and low end range is probably closer to +0.5-6.5 depending on whether he returns to his 2008-2010 trajectory, or bottoms out from 2011 (take it with a grain of salt that in his 12 game re-appearance in August, Choo looked very good; .348/.412/.609).

I targeted the young hitters fairly well, though this was in large part due to the late season contributions of Kipnis and Chisenhall. Despite it's fairly large contribution last season, this group (Santana, Kipnis, Chisenhall, Brantley, LaPorta) has to be considered the largest area of potential growth going into 2012. Brantley's defense in left helped make him a 2+ win player last season and, before his injuries, was showing some improvement in his power. If he plays regularly, I could imagine a Brantley regression making him essentially worthless with a slight breakout and continued strong defense making him suddenly close to a 4-win player. A safe guess, again assuming he plays, is what he did this year, about 2 wins. Kipnis and Chisenhall fall into the anyone's guess category, but most people's guess for the former are that he will adjust quickly, while Chisenhall might be a little slower to come along. Anticipating a learning curve, pegging that pair at 3 wins this season might be reasonable, with a low-high range of 1-7. Santana gets valued by B-Ref as 4.2 wins last season. His peripherals from 2011 suggest he should be better this season. But on the safe side, a range of 2-6 sounds about right. And let's just say, optimistically, that LaPorta doesn't provide a negative contribution. That still puts this group in the 4-17 win range, with a reasonable median estimate of 9.5 wins.

Following Carmona/Hernandez's mild 2010 comeback, I was optimistically hoping for great things in 2011. I don't have to harbor such hopes this season. I don't think we will see Fausto/Roberto in Cleveland this year. The good news is that for our purposes here, we can replace his contribution with that expected from Ubaldo Jimenez. In 2009 and 2010, Jimenez was a 12+ win pitcher for the Rockies, before plummeting to 1.4 wins last season. He is basically the Shin-Soo Choo of pitcher projections. A high end projection probably puts him up to 6 wins, with a low-end being close to 0. The middle point, 3 wins, happens to be exactly what I thought Carmona would give us last year in the best-case scenario.

The Indians "other hitters" did well last season, largely buoyed by Jack Hannahan's surprising contributions (+2.2), some periodically acceptable hitting from Hafner (+1.4), and Shelley Duncan's late season tear (+0.8). I think this group will likely do less, overall, this season. A number of things could prove me to be overly pessimistic, however. Specifically, Aaron Cunningham, Jason Donald, or a mystery "first-baseman-to-be-named-later" could make a larger than anticipated contribution. On the whole, however, I see this group as something closer to +3 wins for 2012.

Justin Masterson, with an assist from Josh Tomlin (not Carrasco, as I had anticipated), carried the load for the young starters. If he stays healthy, I think Masterson showed enough last year to show he is the real deal, and a projection of 3-5 wins from him for the upcoming year sounds reasonable. The other young starters at this point are a more marginal group. Tomlin will likely come back down to Earth, I would guess in the 0-2 range. Jeanmar Gomez seems the most likely to make a significant positive stride forward, perhaps like Tomlin in 2011. The rest (McAllister, Huff, Barnes) seem more likely to be more or less replacement level in their time. In other words, I would guess this group performs at about the same level it did a year ago, collectively, good for 6.5 wins.

Once again, the Indians have a lot (and not just the millions of dollars) riding on Grady Sizemore's health and performance. The safe bet for him is 0, sort of the equivalent of the $1 Price is Right bet. The range of possibilities seems endless, but might reasonably be considered something like -1-4. Asdrubal, even if you think his bat might regress a little bit, could offset that by slightly improved defense. Either way, my guess is he performs similar to how he did a year ago, giving us 3-4.5 wins. My optimistic prediction for this pair a year ago was 5 wins, and I think I will stick with that as a guess this year.

The final category, the generically-named "other pitchers" is where I underestimated the team most last year. This is largely because I didn't anticipate the fantastic performances from Pestano (+2.2), Smith (+2.1) and Sipp (+1.3). I'm not sure I anticipate those again this year, but I think there are a lot of positive things about our bullpen at the moment, assuming Chris Perez doesn't mess it all up in the 9th. The other change to this category this season is the addition of Derek Lowe and possibly Kevin Slowey to the rotation. Neither have been great lately, though, contributing between both of them just 2.5 wins over the past three seasons. So I don't think their contributions are likely to move the meter too far up or down for this group. But I do think last year's performance is a reasonable expectation level for this group, so +4.5 wins.

Totaling these up, the forecast for 2012 is something like +33 wins, or an 85-win team. Mediocrity at its finest, you might say. The difference, however, in the comparisons above is that these were my optimistic projections for 2011, while the +33 win figure is closer to what I view as a reasonable, or median projection for 2012. The positive performances from a season ago, the development of some of our young guys, and a few of our acquisitions have, in other words, boosted our expected win total relative to a year ago (pre-2011 spring training) by about 10 wins. Last season we ended up performing up towards our high-end scenario. A similar result this year might make us a 90-win team. The likely key players in this aren't hard to identify. What will Choo do? Can Grady be at all effective and stay healthy? Can Ubaldo regain some of his ace-like qualities? What kind of development can we expect, and how quickly can we expect it, from our young hitters? No doubt other questions will emerge throughout the season with equal performance, but correctly answer those four questions sets the difference between a team with a victory total in the low-90s and one in the low-70s.

In keeping with last year's post, here is the pie graph illustrating the above projection: 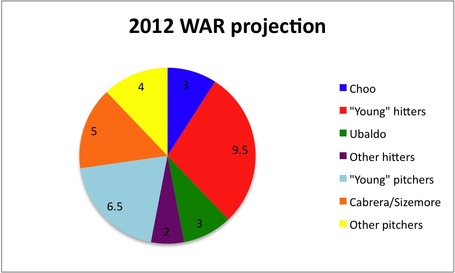