Arbitration and a Conclusion to the Lost Offseason

Time to end this series with a look at what the Indians with their arbitration-eligibles, and review the roster that started the season in Cleveland.

Share All sharing options for: Arbitration and a Conclusion to the Lost Offseason

The Indians had seven players eligible for arbitration last winter, which was a high number for an organization that tended to lock up players by the time they become eligible. This new tactic of being more selective with lock-up deals reduced the risk of having to pay a player who flamed out after a good start to his career, but at the same time meant that the Indians would be paying a higher salary per year for the players they kept on the roster.

Here's a short breakdown of the players who were eligible for arbitration, and the amount they eventually signed for.

The Indians attempted to negotiate an extension, but Choo opted instead to go year-to-year, which is common practice for Scott Boras clients.

Masterson got a big bump in salary, as is common for starting pitchers.

Closers are overvalued in arbitration more than any other position/role on the roster, Compare Perez's salary with the one Joe Smith received.

This was Hannahan's first year eligible for arbitration, and he'd probably make more in 2012 than in his previous 11 seasons combined.

Cabrera was one of two players that went as far as exchanging salaries with the Indians. But the Indians wouldn't actually go to arbitration with Cabrera, and later that spring, they'd extend him through the 2014 season (one season past free agency eligibility).

Because Perez had spent some time in the minors (therefore not accruing service time) after first becoming eligible for arbitration, he'll have a fourth arbitration-eligible season this winter before finally having enough service time to be eligible for free agency.

So here's what the Opening Day roster looked like, along with what those Opening Day players did in 2012 (Fangraphs WAR): 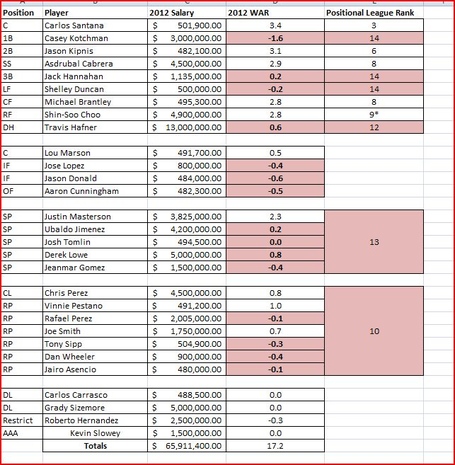 I included also the team positional rank in the AL; the ranking includes all players at that position, not just the player list. A player's WAR which was below 2.0 for a position player or starting pitcher or below .5 for a reliever is highlighted in red. Also, a league ranking below 9th was highlighted.

I placed an asterisk next to Choo's WAR because his number was very adversely affected by a brutal defensive number; if Choo's defensive numbers were around career norms, right field would have 3rd or 4th in the AL.

My main criticism of this offseason, given the constraints of the payroll and available players, boils down to a couple points:

One thing Antonetti did accomplish with last winter's moves was to give the Indians a lot of payroll flexibility going into this offseason. The Indians once again will have just a few players under contract in 2013, and the few players that have guaranteed money coming their way in 2013 (Asdrubal Cabrera, Carlos Santana) they'd have no problems trading.

The issue, though, if whether Chris Antonetti is the right guy to be able to use this flexibility to start rebuilding this roster. We're probably going to have a roster turnover not seen in an offseason since after the 2001 campaign; when the Indians have previously done their tear downs, it came during the season, not after it.

Had the Indians had a strong farm system, they could have used that payroll flexibility combined with some key prospects to acquire a player via trade, or simply plugging those prospects into the various holes at the major-league level; now they're likely going to have to do that by trading major-league talent, essentially robbing Peter to pay Paul. That's on both Shapiro and Antonetti, but it looks like they'll have an opportunity to clean up their own mess, which isn't usually something a front office has the chance to do.