Even if Chris Perez had said nothing but the usual athlete platitudes in his post-game comments, the Indians would still be dangling him on the trade market this winter.

Share All sharing options for: 2012 in Review: Chris Perez

Perez has a classic fastball/slider combination, throwing the fastball in the mid-90s and the slider in the low-to-mid 80s. Both are plus pitches, though his slider is normally his put-away pitch; he rarely throws his slider when behind in the count. If you look at his pitch usage, he's a very predictable pitcher, but because his stuff is so good, it doesn't really matter that batters come to the plate knowing what they're going to get: 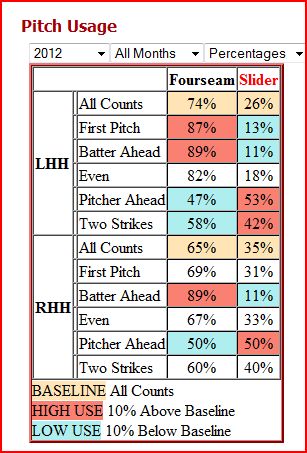 Perez had a rather extreme reverse platoon split in 2012, with right-handers hitting him much better than left-handers, especially in the power department. The pitch Perez got beat on most against right-handers was his fastball, which makes sense given that he almost always used it when he fell behind in the count, but right-handed batters who swung on the first pitch (which was usually a fastball) had a slash line of .361/.361/.722. Hence the reason Perez started the count with his slider more often against right-handed batters.

But overall Perez continued to be very effective in closing situations. Of the 43 save opportunities he had in 2012, he blew just 4 of them. That's going to lead to another sizable salary increase this offseason, as arbitration has really rewarded closers. The Indians are probably going to pay Perez at least $6.5M next season, and with Vinnie Pestano waiting in the wings, there's a very good baseball reason to deal him even before getting into Perez' off-field controversies.

As for the controversies, this post will catch you up to speed. Even though both Chris Perez and incoming manager Terry Francona were both saying all the right things in October, I'd have to think the Indians will trade him if they get a decent offer for him. That being said, I wouldn't expect a massive return for him, as whoever trades for him will probably be paying him anywhere from $14-$16M over the next two seasons, which is more along the lines of a free agent closer than one still under team control. Perhaps a club like Milwaukee, whose season was torpedoed by an awful bullpen, would have some interest?