The Indians made several trades last winter, with a couple of them resulting in players that were on the 25-man roster. The first one of these came at the beginning of the offseason, and was the most significant as far as the 2012 season was concerned. It may turn out that the most significant trade in the long term happened towards the end of the winter.

Share All sharing options for: The Lost Offseason: Trades

As previously mentioned, the Indians had major needs in several areas, including the rotation, first base, and the outfield. The Indians would sign Casey Kotchman in free agency in the hopes that he'd plug the first base hole, but they'd attempt to fill the other positions via trade.

Before I begin, keep in mind that last winter the Indians' farm system was rated among the worst in baseball. They had dealt their two top pitching prospects (Drew Pomeranz and Alex White) to Colorado for Ubaldo Jimenez during the season, and they didn't really have any tradeable top prospects left; the only Cleveland prospect who made the various Top 100 lists that winter was Francisco Lindor. Lonnie Chisenhall probably also would have made the list, but he wasn't considered a rookie any longer. After Lindor, the quality dropped off considerably, with guys like Nick Hagadone and Chen Lee in the top 5; these guys will probably be good major-league relievers at some point, but relievers aren't nearly as valuable to a big-league club as position players or starting pitchers. So the Ubaldo Jimenez trade meant that Chris Antonetti didn't really have any big trading chips to use, unless he was willing to deal Francisco Lindor or Lonnie Chisenhall. The Indians probably had some interest in Gio Gonzalez and Trevor Cahill, both of whom were traded by Oakland last winter, but they couldn't match quality of prospects that Oakland would receive from Washington and Arizona respectively.

The strength of the farm system, such as it was, was very young position players (Lindor, Wolters, Luigi Rodriguez, Ronny Rodriguez) and high-level relievers (Hagadone, Barnes, Lee, Putnam), so it wasn't surprising to see the Indians deal from its strength in order to try to fill in some major-league holes.

The Indians never pursued (as far as I know) a free agent starting pitcher, as they acquired two starters via trade.

This particular trade was a salary dump, pure and simple. Derek Lowe was coming off a horrible season, and was due to make $15M, so the Braves were looking to deal him to whoever would be willing on to take on the most salary, and given that any salary dumped could be spent on free agents, they wanted to move quickly.

Enter the Indians. They had a need for a starting pitcher, and when the Braves agreed to pay $10M of Lowe's $15M salary, they did the deal. Lowe at the very least could eat some innings, and $5M wasn't that much for a starting pitcher. They dealt LHP Chris Jones to the Braves, who was at the time a 22-year-old reliever who had just finished up the season at A+ Kinston. Jones could eventually turn into a LOOGY, but not much else; here's Baseball America's scouting report:

Jones has spent most of the past two seasons with high Class A Kinston working as a multi-inning reliever. While his strikeout (8.4) and walk (3.7) rates per nine innings are ordinary for an A-ball reliever, Jones has allowed only one home run to a lefty batter with Kinston the past two years, holding them to a .172 (27-for-157) average. His primary pitches are a high-80s fastball and a slurvy high-70s curveball, but he owes much of his success to a deceptive delivery that hides the ball from lefty batters.

Valbuena was designated for assignment when the Indians added three players (Danny Salazar, Juan Diaz, Scott Barnes) to the 40-man roster in preparation for the Rule 5 Draft. Valbuena would be placed on waivers again the end of spring training, and he'd end up with the Chicago Cubs, playing mostly third base after making it back to the majors in June.

12-16-2011: Traded RHP Cory Burns to the San Diego Padres for OF Aaron Cunningham

The other trade for a major-league player. After losing out on various free agent outfielders, the Indians elected to go the trade route. Cunningham was out of options, but had a decent minor-league history. He was ranked in Baseball America's Top 100 prospects before the 2009 season, but just hadn't been able to make the jump to the majors, struggling in short major-league stints from 2008-2011 with San Diego. The key factors in the Indians acquiring him was that Cunningham could play center field as well as bat right-handed. He would be the backup option in case Grady Sizemore got hurt or Michael Brantley struggled at the plate.

To get Cunningham, the Indians dove into its high-level minor-league relief depth again, trading RHP Cory Burns, who was coming off a very good season in Akron. He was the Aeros' closer in 2011, and finished up with 35 shiny saves. Burns owed more of his success due to a funky delivery than stuff, as you can see from Burns' major-league debut this year:

Of the three minor-league relievers traded last winter, IMO the best of the bunch was dealt a player that wouldn't pitch for the Indians in 2012. Kevin Slowey had been dealt earlier that winter from the Minnesota Twins, and the Indians, who had had their eye on Slowey for quite a while, almost immediately started asking about him after he landed with the Rockies. The Indians had just found out about Fausto Carmona's identity problems, and although they mentioned that they would have acquired Slowey regardless of whether Carmona was clear to enter the US or not, the news had to at least push them a bit in favor of making the trade.

Colorado would end up paying $1.25M of Slowey's $2.75M salary, so in exchange for that, the Indians sent the Rockies a better prospect than they otherwise would have. Zach Putnam was ranked fairly high as a prospect in the organization, and he'd spent some time in Cleveland the year before. His strikeout rates weren't what you'd expect of a reliever, but his repertoire led to a lot of ground balls. Putnam spent most of 2011 in Columbus, with a few appearances in Cleveland, and was on the cusp of making a major-league team. But the Indians, again, had some depth here, and used Putnam to help improve the depth at another position.

The Indians had been looking all winter long for a corner bat who also hit right-handed, and finally at the end of the winter they acquired one. Well, sort of. Canzler had mashed at the AAA level the past two seasons, but he didn't really have a position (first base was his best position by default) and the strikeout rates in the minors combined to consign him in the minds of many organizations as a AAAA guy.

But, given the cost (undisclosed amount of cash) and the fact that the Indians still hadn't acquired a first baseman made the deal almost a no-brainer. The Indians would however sign Casey Kotchman, which pushed both LaPorta and Canzler to AAA, where both would spend most of the 2012 season.

This is here for completion's sake. Lord Kelvin would end up in the Detroit organization, and he'd spend all of 2012 in AA Erie.

So here's what the roster looked like after the trades and free agency: 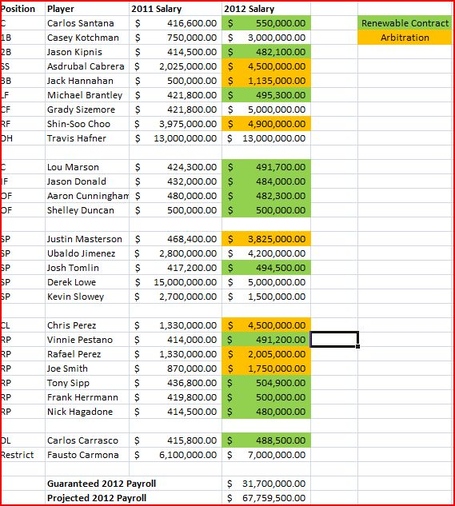 I'll probably do one more segment, which will cover arbitration, and then call it a series.