There were two games hidden in this contest: a pitcher's duel, and a wild slugfest.

Fausto Carmona seems to have gotten his season back on track. If not for another botched double play, he gets through at least seven innings without giving up a run. Fausto has gone back to basics, throwing his two fastballs as his pirmary pitches. He had been getting in trouble with home runs even with a very high ground ball ratio, and that was due to mistakes with his sliders and changeups. In this game he continued that strategy, and it worked. He gave up six hits in 6.1 innings, and walked one.

The game was an uncharacteristic pitcher's duel until the seventh inning. Shelley Duncan, who is only here for the weekend, broke the deadlock by driving in  Kosuke Fukudome with a double that hit at the base of the wall in right-center. Carrera pinch-ran for Duncan, and went to third on a ground out, and scored with two outs because Darren Oliver dropped the ball while on the rubber. Later, the Indians pulled a play out of last night's game when Lou Marson scored from second on an infield error. The Indians now led 3-0, and with Carmona pitching well, things were looking up.

The bottom of the seventh opened with two singles; Mitch Moreland blooped one into shallow left, and Yorvit Torrealba hit a grounder just past Lonnie Chisenhall. Carmona got his ground ball, but Asdrubal Cabrera couldn't get his footwork straight, and couldn't field the bouncer and step on second at the same time. A run scored, and runners were on second and third with nobody out. Ian Kinsler, in a long-term hitting slump, drove both runners home with a single. Carmona would get the first out of the inning on another grounder, and would get pulled for a left-on-left matchup (Tony Sipp against Josh Hamilton). But Sipp couldn't get the strikeout, as Hamilton lifted a fly ball to deep left, easily scoring Kinsler from third. So after six innings of scoreless baseball, the Indians and Rangers combined to score seven runs in the seventh inning.

The two teams took an offensive breather in the eighth.

Rangers closer Neftali Felix came in to attempt the save in the ninth inning. Kosuke Fukudome started the inning with a double that Nelson Cruz just missed catching. Ezequiel Carrera bunted Fukudome to third, which brought up perhaps the most critical at-bat of the season to date. The Tigers had already won, and if Chisenhall couldn't get the runner home from the third, the Indians likely go five back in the division race. Feliz pitched Chisenhall mostly up in the strike zone, and the Indians' rookie third baseman couldn't do much with them besides fouling them off. Finally Feliz threw one lower in the strike zone, and Chisenhall didn't miss it, hitting a sharp single and tying the game at 4. After Lou Marson was retired, Michael Brantley came through with a great at-bat as well; he pulled a Feliz pitch into right field, and because the Rangers were playing Brantley around towards left, Chisenhall was able to score the go-ahead run all the way from first (though just barely).

Jason Kipnis then capped the inning by hitting his fifth home run. Yoshinori missed on the inside part of the plate, and as we've seen, it's hard to get anything by Kipnis there. He launched a two-run homer, giving the Indians a 7-4 lead. If not for that home run, the Rangers would have tied the game again in the bottom of the ninth.

Chris Perez made things interesting in the ninth, to say the least. Just like the night before, he retired the first two Rangers of the inning, and like the night before, got into trouble with two outs. He walked Ian Kinsler, then gave up two singles, then uncorked a wild pitch to push the tying run into scoring position for Michael Young, the previous night's hero. Young hit a sharp grounder right to Asdrubal Cabrera, who fielded it and threw over to end what turned out to be a wild game. If Young had hit the ball a couple of feet in either direction, both runs would have scored. 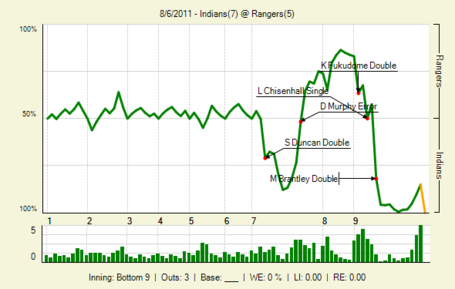