An early lead in Arlington, no matter how great, always seems to come with a sense of dread. It's baseball's version of the Damoclean Sword: you may have control of the game for now, but defeat is always suspended over you by the thinnest of threads until the final out is made. The park makes even the most routine outfield flies an adventure, and the hard infield turns routine grounders into seeing-eye singles. Combine those attributes, which are always present, with the blast furnace weather, and an offense that would be productive in any other park, and that thread is strained even more.

The Indians jumped into the driver's seat right at the beginning of the game. Texas starter Derek Holland, who dominated the Indians when he last faced them was awful, and the offense didn't let him off the hook. Carlos Santana mashed a three-run homer to give the Indians a 3-0 lead, in Santana would drive Holland from the game an inning later with two-run double. In the third, Shelley Duncan hit a solo home run off Scott Feldman. That ended the scoring for the Indians.

This was Ubaldo Jimenez's first start as an Indian, and he struggled very much to get through the first couple innings. It's likely he felt more pressure than in a usual start; after all, he was pitching for a new team, in a new league, and in a new park. He gave up runs in the first, second, and third innings, each time getting the third out before it turned into something larger. But those single-run innings were costly in pitches, and those pitches cost Jimenez a couple innings. He was pulled in the sixth after giving up a Mike Napoli home run followed by a walk, his pitch count already closing in on 110. The Indians had the lead, but the bullpen would need to pitched five innings. It almost happened.

Chad Durbin, who relieved Jimenez, allowed the inherited runner to score, and the sixth inning ended with a the Indians only up 2. This was now a game of attrition, as every key member would be needed to preserve that lead. Joe Smith pitched a perfect seventh, and Vinnie Pestano got through the eighth thanks to Ezequiel Carrera's tremendous diving catch, and a rare mound chewing-out from Manny Acta. Chris Perez got the first two outs of the ninth rather easily, and faced Josh Hamilton with nobody on. It seemed the thread would hold. Hamilton, after striking out three times earlier in the game, laced a sharp single to extend the ninth. Michael Young was up, and still the odds were in favor of victory. Perez threw a pitch just slightly onto the plate, and Young drove it into the outfield, and in the hot Texas heat, the ball carried over the fence. Tie game.

What happened in the bottom of the ninth was one thing; two excellent hitters didn't miss slight mistakes. But happened in the bottom of the eleventh was driven by bad defense. Carlos Santana couldn't keep a Rafael Perez pitch in front of him, allowing Elvis Andrus to go to second. And when Josh Hamilton reached on an infield single, Matt LaPorta didn't stop Andrus from going home; instead he assumed that the runner would stay at third, because that's what usually happened. By the time LaPorta realized his lapse, his lapsed it was too late. Neither play was ruled an error, but unofficial errors can lead to losses just the same as official ones.

The Indians are now again four games out. It's one game in the standings, but this loss was devastating, in that not only did the team blow a five-run lead, but had to burn through the bullpen in the attempt to preserve a lead and later a tie. That will make the next two games, played in exactly the same circumstances, that much more difficult. 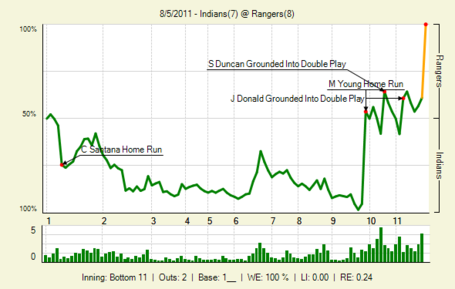