I guess this is what happens when the offense clicks.

Justin Masterson got through six innings, giving up three runs on five hits and striking out nine. He had to leave after six not because of ineffectiveness, but because he thrown over 115 pitches just getting to that point. In his final inning, he pitched around another botched double play, ending his evening with a strikeout of Jason Varitek.

Masterson left the game in the lead because the Tribe offense took the lead 5-3 in the top of the inning. Carlos Santana took Franklin Morales deep for a two-run homer; it was just his second homer as a right-hander this season. Santana would finish the game with a 3-for-4 line, and the other guys in the middle order had similar nights. Travis Hafner also had three hits, including two doubles, and Asdrubal Cabrera would score three times.

The Indians were fortunate in that Erik Bedard was on a pitch count, which was reached by the fifth inning. That left a gap in the game, and the Indians took advantage, scoring two in the sixth and another in the seventh. And because the Yankees were coming to town for a weekend series, Terry Francona left Andrew Miller out there to (almost) finish the game. Miller, who seems off proportionally because of his long legs, threw over 70 pitches in 2.2 innings of work. The former top prospect (and one of the top pieces of the haul for Miguel Cabrera) was all over the place, and seemed to go to a full count on each hitter whether the hitter wanted to or not. His stuff is still there, but the other components of a major-league pitcher aren't.

By the time the game reached the ninth inning, the lead was a luxurious four runs, but because Chris Perez had already warmed, he pitched the bottom of the ninth anyway.

Thus ended a well-played and especially well-pitched series in Boston, though the results didn't match. But the hitting environment is going to get even tougher, and the lineup not any easier. Ubaldo Jimenez will make his Cleveland debut tomorrow night in Texas, with the Tigers playing in Kansas City. 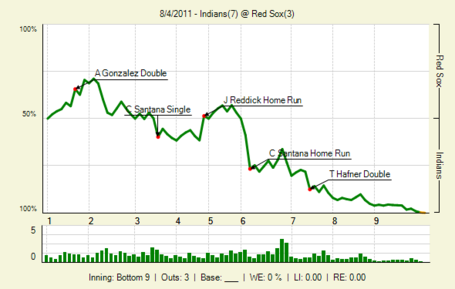