In three games in Boston, the Indians have outscored the Red Sox 14-13, but have lost two of the three games. But playing a good team close isn't good enough when wins are what matters.

Carlos Carrasco will take a turn off because he'll start serving his suspension starting tomorrow, but he'll definitely be in a better mindset now than if he had taken the suspension immediately after the incident against the Royals. Carrasco went seven innings tonight, an accomplishment considering the difficulties the Boston lineup presents. It wasn't an easy start for Carlos, especially how the first inning went, but he settled down after that, and left the game with the Indians still in it. He was able to throw his fastball for strikes, and that's usually a key for his success, as it sets up his changeup and slider.

Boston got on the board thanks largely to Kevin Youkilis' bloop double. The double, which fell just out of reach of Jason Kipnis, would set up David Ortiz's two-run, two-out single. One of the runs was ruled unearned because Austin Kearns bobbled the ball in left field, but I though Youkilis would have scored anyway.

Jason Kipnis got the Indians on the board with his fourth home run in four games; he jumped on a high Tim Wakefield knuckleball and lifted it into the Tribe bullpen beyond the right field fence. Jason would go 1-for-2 with two walks on the evening, continuing his hot beginning to the road trip. Later in the inning, Travis Hafner hit a "good-hop" double to plate the second run of the inning. Hafner hit the ball into the ground about half-day down the first base line, and ball jumped over Adrian Gonzalez's head and down into the right field corner.

Boston would score a run in the fourth when Marco Scutaro beat out the relay to a potential double play. With runners on second and third with one out, Manny Acta elected to walk Josh Reddick to set up a double play possibility, as well as a force at any base. Carrasco got a ground ball, but it was just a little to Cabrera's right and a little to slow to get two outs out of it.

Ezequiel Carrera would tie the game again with a two-out ground-rule double, and after that, it was a battle bullpens. Tony Sipp pitched a scoreless eighth, and Joe Smith came on to pitch the ninth. He got Darnell McDonald and Scutaro to ground out, but left a pitch right over the plate to Jacoby Ellsbury, who hit it just over the center field wall to end the game. It was Smith's first run allowed in his last nine appearances, but it was a critical one, as it pushed the Indians four back in the standings for the first time all season.

With the loss, the Indians are now at .500 after being as much as 15 games over the break-even point (reached, coincidentally, after a win against Boston on May 23). There's still plenty of time to come back, but I don't like the trends. The offense, after posting a .791 OPS in April, hasn't topped .700 in any month since. There's enough pitching on this club, especially with Jimenez now in the rotation, to make a run, but the Indians have to score more runs. 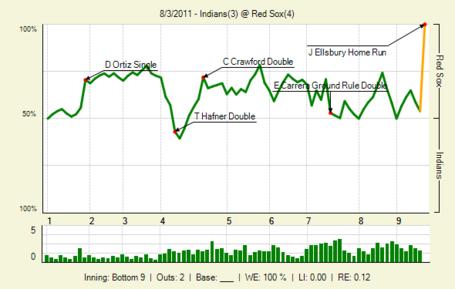