Jeanmar Gomez matched David Huff's outing on Monday, going six scoreless innings, and the offense almost allowed the the back end of the bullpen to take the night off. This is a formula that the Indians need to follow to continue winning, as it's promising that the supposed weak links of the rotation have thrown 12 shutout innings over the last two games.

Kosuke Fukudome was again one of the main drivers of the offense. His third inning double over the right fielder's head gave the Indians a 2-0 lead, a lead that the Indians wouldn't relinquish. Since joining the Indians, Fukudome has hit .284/.328/.405 (BA/OBP/SLG), and has been especially good in the last two weeks, hitting .347/.407/.531. He hasn't walked as much with Cleveland as he did with the Cubs, but he's made up it for with hitting for more power.

Carlos Santana, who has also stepped up his offense lately, hit a two-run homer in the sixth to push the lead to 4-1. Oakland starter Trevor Cahill would last just one more batter, and he was pulled in favor of Fautino de los Santos. Jack Hannahan then put the game out of reach with a two-run homer of his own. Hannahan has also come alive at the plate in the last month, posting a .940 OPS over the last 28 days.

Chad Durbin got through the seventh without any trouble, and the plan was to have Rafael Perez finish the game to give the rest of the bullpen a rest. Perez retired the A's in order in the eighth, but he ran into trouble in the ninth, and Vinnie Pestano had to finish things off. 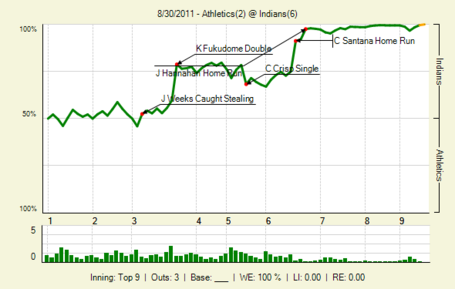