David Huff holding his own versus the Red Sox, and leaving the game after 5.0 innings with the lead was a piece of very good fortune for the Indians , but that fortune was squandered by the bullpen, and indirectly by an offense that could score just two runs on the evening.

A couple long and difficult innings early in the game shortened Huff's outing. Jason Kipnis'  error in the second led not only to an unearned run, but at least 10-15 extra pitches that might have taken the Indians left-hander through an additional inning. After the Kipnis error (which left runners on first and second with nobody out, Mike Aviles hit a ground-ball single to load the bases. Huff would recover to strike out the side, but he bounced his first strikeout, allowing the unearned run to score.

After his nice outing, Huff was rewarded with a ticket to Columbus, as the Indians needed to get Ubaldo Jimenez onto the 25-man roster. Carlos Carrasco will likely drop the appeal to his suspension after his start on Wednesday night, but with an off-day on Monday, the Indians won't need a sixth starter. Even if he doesn't pitch for the Indians the rest of the season, Huff has had a successful season, reinventing himself thanks to his new cutter in addition to a more livelier fastball. He started the season as perhaps the ninth or tenth starter on the depth chart, and he'll end it as the sixth.

The Indians scored their two runs via solo shots by their top two position prospects. Jason Kipnis homered in the first inning off Josh Beckett, his third home run in three days (the first time a Cleveland rookies accomplished the feat since Richie Sexson did it in 1998). In the fourth, Lonnie Chisenhall gave the Indians a 2-1 lead with his homer down the right field line. There were some other opportunities to score off Beckett, but the Indians left runners on second base in the second, third, and sixth innings. Michael Brantley left Ezequiel Carrera on second base in the seventh after Beckett had left, and the offense went in order in the eighth and ninth innings.

Rafael Perez came in for Huff to start the sixth inning, and gave up his first home run of the year to Kevin Youkilis, the first batter he faced, on a hung slider. The score remained tied until the ninth inning, when Vinnie Pestano gave up three straight singles to end the game.

This game was a missed opportunity, and the Indians can't afford them with their precarious position in the standings. Detroit beat Texas to gain a game on Cleveland, leaving the Indians three games out going into Wednesday's games. 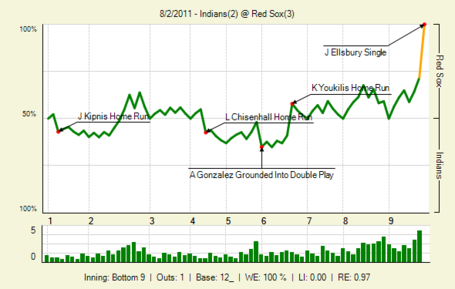