At this point, with five key offensive players either on the Disabled List of on their way to it, the pitching staff is going to have to carry this club. Four true rookies had plate appearances tonight, and Shelley Duncan was the starting left fielder. Oakland starter Brandon McCarthy had little trouble going eight innings, striking out ten Indians batters.

But David Huff gave the Indians what at this point is almost required: he went six shutout innings. Huff has re-tooled his mechanics, moving to the third base side of the rubber and simplifying his windup, but what's really made him more effective this season was his change in strategy. He's now much more aggressive in the strike zone, emphasizing outs quickly in the at-bat. Huff was around when Cliff Lee was still here, and David has taken a lot from what made Cliff so successful.

The Indians only had five hits on the evening, but they made good use of them. After the two batters of the sixth inning struck out, Ezequiel Carrera singled through the left side, and then Kosuke Fukudome doubled down the right field line. Carrera scored all the way from first base, just ahead of the tag; he's probably the only player on the current roster who would have scored. The Tribe's second run of the evening came from of their few remaining offensive threats: 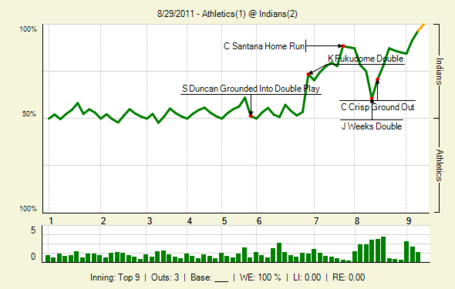