Both teams blew golden opportunities in the first inning, scoring just one run after loading the bases with nobody out.

Normally a pitcher who gets in trouble in the first isn't locating. That wasn't really the case with Justin Masterson. The Royals opened the game with two a bloop single, a walk, and another bloop single; both hits fell in front of Ezequiel Carrera. Carrera, who plays a deep center, could have caught the first one if he had playing shallower, and should have caught the second one, even from where he was playing. He broke back on Butler's single, and couldn't make up the bad break with speed. Masterson got Eric Hosmer to fly out to shallow left for the first out, and got Jeff Francouer to hit a sharp grounder to LaPorta. A double play might have been turned, but we'll never know since LaPorta's throw was wild, and Asdrubal Cabrera made a fantastic play just keeping his foot on second. The Royals made the third out on the bases, as Melky Cabrera was tagged out at home after Jeff Francouer got caught starting towards second.

Carrera made two other key mistakes in the game; he got picked off first in the fifth, and botched a drag bunt in the eighth inning. After Jeff Francouer dropped a Jerad Head liner, Carrera laid a bunt down the first line, but the ball was struck way too soundly, and the first baseman easily went to second to force Head.

The circumstances were similar in the first. Royals starter Bruce Chen allowed a single, a walk, and a single to start his outing, then walked Carlos Santana to force home the tying run. But on the very next pitch, Shelley Duncan popped out to the first baseman, and Kosuke Fukudome hit a ball back to the pitcher for a 1-2-3 double play.

That was it for the Indians. They managed just three hits the rest of the way, as finesse artist Chen settled down after his rocky first inning. The Royals took the lead in the third on a two-out Mike Moustakas singled, and they wouldn't score again. So for seven at-bats, the Indians were down just a run, but couldn't push anything across. The Indians' lineup was without Choo and Thome; Choo will be sitting out at least a couple games in the hopes that his side muscle gets better. Jerad Head made his major-league debut with a start in left field, and he contributed one of the five hits on the day.

The Indians won't lose any ground today, as the Twins beat the Tigers 11-4 in Minnesota. But at this point, maintaining the status quo hurts almost as much as losing a game. 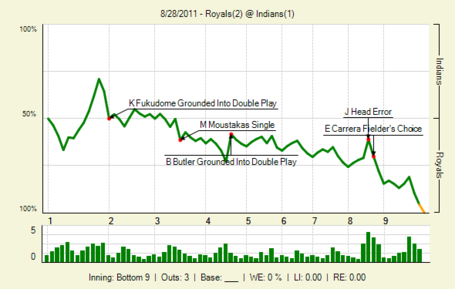