This game was not a pitcher's duel, but it turned out to be just as exciting.

First, the daily injury news. Shin-Soo Choo started the game, but had to be pulled in the fourth inning. He has a strained muscle in his left side, and while it doesn't hurt him when he swings, he's been feeling some discomfort when he starts to swing and then stops. He'll try to rest it for a few days.

The Indians opened the scoring in the second, when Jack Hannahan singled in Shelley Duncan. The Royals responded with three in the fourth (two of them coming off Mike Moustakas' double). In the bottom of the inning, Hannahan struck again; with runners on first second, he turned on a hung slider and hit off the right field wall. The ball took a funny bounce, and Jack made to third for a two-run triple. The game was now tied.

The Royals untied it thanks to a Melky Cabrera double, though the damage could have been worse. Alex Gordon, who was on first, ran through a stop sign and tried to score and was tagged out at home. That was the second out of the inning, and Billy Butler then hit a fly ball to right field to end the inning.

Jim Thome then hit his 602nd home run, and his 335th as an Indian in the sixth inning. This one was an opposite field shot, and just cleared the fence in left-center. But again, the Royals offense would respond. Fausto Carmona opened the inning by hitting Johnny Giavatella, got Salvador Perez to ground out to third, and then induced another ground ball from Alcides Escobar, but Carlos Santana couldn't field it, and the Royals had runners on first and third with just one out. Carmona was pulled, and Tony Sipp was summoned to face Alex Gordon. Sipp made a mistake with something off-speed, and Gordon hammered it out of the park. The Indians were now down 7-4 with three at-bats remaining.

But Asdrubal Cabrera would take care of things. He hit an RBI double in the seventh, and in the eighth, hit a three-run homer to give the Indians the lead. The Royals would mount a comeback in the ninth, though, thanks to Ezequiel Carrera's error. Salvador Perez hit a floater into shallow center field that Carrera couldn't catch, and he let the ball bounce past him. Perez probably could have gotten to third if he had been running, but instead he stopped at second. So Alcides Escobar remained in the game in order to bunt Perez to third. The bunt was fielded by Chris Perez, and he made a good throw to third to nab the Royals catcher. Chris then struck out both Gordon and Melky Cabrera to end the game. The Indians for at least one more kept pace with the Tigers. 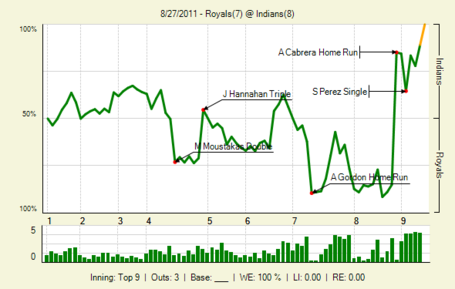