41, 337 fans packed into Progressive Field to see Jim Thome, but they saw a great game as well.

The Indians went in order in the first, so after the top of the second, fans started to cheer in preparation of Thome's first at-bat in an Indians uniform in almost nine years. Thome had appeared in Cleveland many times since he left, but always to a chorus of boos. But now that he was back in an Indians uniform, the fans gave him a standing ovation, one that felt nine years in the making. Thome swung at the first pitch and hit a dribbler to the pitcher, but that didn't really matter; the fans continued to cheer him all the way into the dugout.

But there was a game to play, and the almost sell-out crowd got into a fantastic pitcher's duel. Felipe Paulino, who at one this season was a teammate of Ubaldo's, had a fastball that sat in the mid-90s all evening, even as he approached 110 pitches. It's hard to believe, after watching his performance, that the Royals acquired him for cash just three months ago. He didn't allow a run until seventh inning.

So Ubaldo Jiménez had to pitch well in a big game. Last Sunday, he was rocked by the Tigers for seven runs, but tonight, against a very good lineup, he was equal to the task in front of him. He allowed an Eric Hosmer home run to start the fourth, but that was all the Royals would get. He struck out 10 and walked just 1 in seven superb innings of work, and kept the Indians in the game.

MIchael Brantley was placed on the Disabled List before the game, and Shin-Soo Choo was held out of action as well, so the lineup resembled that of a Spring Training split-squad game. Two rookies were placed at the top of the order, and Shelley Duncan was in left field. In the fifth, it seemed as though they would scratch out a run, but Alex Gordon made an outstanding throw to nab Kosuke Fukudome at the plate. In the seventh, another Royals almost made an assist, but Jack Hannahan's single didn't get to Melky Cabrera quite fast enough, and Carlos Santana pulled off a very good slide, going around the catcher and slapping home plate as he slid behind it. Another Paulino walk loaded the bases, and Tim Collins came in to face Ezequiel Carrera. The left-hander fell behind Carrera, and after several spoiled pitches, walked in the go-ahead run.

Vinnie Pestano pitched a quick eighth inning, and Chris Perez entered the game to attempt the save. He almost didn't get it. With a runner on third and two outs, Chris Getz get a line drive, but right at Shin-Soo Choo (who had entered the game the inning before). The Indians survived, and as Detroit would win as well, the 2-1 victory at home was a critical one, not only to remain 6.5 games back, but to at least try to begin one more run at the playoffs.

Thome's new teammates celebrated his arrival by wearing their socks high for the game; it was reminiscent of the first time the Indians as a team did in 1997. The socks weren't the only throwback:

At one point during the game, first-baseman Matt LaPorta asked him if this was what the ballpark was like back in his first tour with the Indians.

"You could feel the electricity," said Thome, who admitted he was more nervous Friday than when he was here as a Twin swinging for his 600th homer. 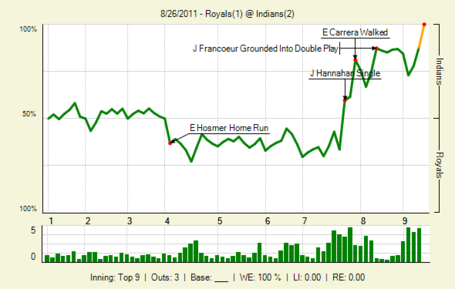