Jim Thome will be in uniform in time for Friday's game, so I'd expect big crowds all weekend. One of the things I didn't really cover in the transaction analysis was the effect of Thome on attendance the rest of way, but he should bring in the crowds even if the Indians fall officially or unofficially out of the playoff race.

The Indians will be sending their top three pitchers to the mound this weekend, and with major uncertainties with Josh Tomlin's health and Davd Huff's effectiveness, these three games are essentially must-wins.

Ubaldo will need to command his fastball, something that he hasn't done in most of his Indians starts. Only two of his fastballs (out of 39) were swung at and missed in Sunday's game. With the kind of stuff he has, that's way too low a ratio. He'll be facing a decent lineup, though; the Royals offense ranks 6th in the AL in OPS, with a strong middle of the order. Billy Butler, Alex Gordon, and Eric Hosmer are going to torment the Indians for years to come, and this year's club is getting contributions from Melky Cabrera (120 OPS+) and even Jeff Francouer (119 OPS+).

The Royals' weakness is pitching. Their staff ranks 13th in the league in ERA, have allowed the most walks in the AL, and rank only 11th in strikeouts. Only one of the Kansas City starters that face the Indians has a league-average ERA (Felipe Paulino, 101 ERA+). Danny Duffy, who pitches on Saturday, was ranked the #68th-best prospect before the season by Baseball America, but has struggled with walks in his first major-league season. Bruce Chen, the man with a thousand suitcase stickers, has pitched well in August, and is coming off a 7-inning, 9-strikeout game in Toronto. 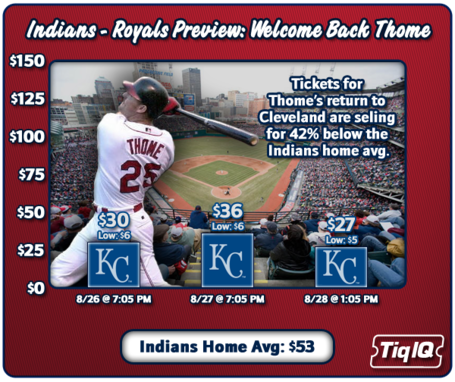